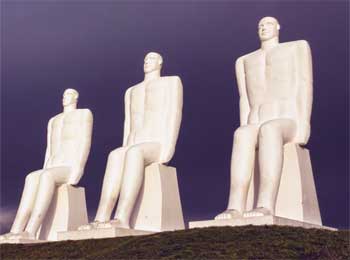 A man who used to travel and sell toys. One day he arrived at a kingdom where he came to know that King of that Kingdom like to see new toys.

He went to King’s palace where court was being held. Toy seller said, “Today i will show you toys which you had never seen before.”

King allowed him to present his toys in court.

Toy seller took out three toys which looked like human figures from his box and placed them in front of King and said, “These toys are very special in themselves. Although they look alike, they are actually very different.”

King looked at those three toys very carefully but there was no difference in sight and thought why there is so much difference in price!

Not able to find any difference, King asked his ministers to find the difference. Ministers looked those toys from all side but couldn’t solve the mystery.

When straws arrived, Priest put straw in ear of first toy, everyone saw that straw went straight into the stomach and after a while lips of toy moved and then closed.

Now, he put the straw in ear of next toy and this time everyone saw that straw came out of other ear and no other movement was there.

Seeing this everyone’s curiosity was increasing as what would happen next.

Now priest put straw in ear of third toy and it’s mouth opened at once and it was constantly moving as if it wanted to say something.

Seeing this King asked royal priest, “What’s all this and Why there is so much difference in the price of these toys?”

Priest replied, “A man of character always keeps to himself what he has heard. And only after confirming them, he opens his mouth. That is his greatness. This is the knowledge we get from first toy and that’s reason it’s value is hundred thousand gold coins.

Some people are always engrossed in themselves and ignore everything. They don’t have any desires for any attention or appreciation from others. Such people never harm anyone. This is the knowledge we get from second toy and that’s reason it’s value is one thousand gold coins.

Some people are weak of ears and have loose mouth. Just after hearing anything, they would tell about it to people around them without even trying to know if it’s truth or lie and spread false knowledge in the society. That is why it’s value is only one gold.”

You May Also Like: Filter Test for Rumors – Socrates Story