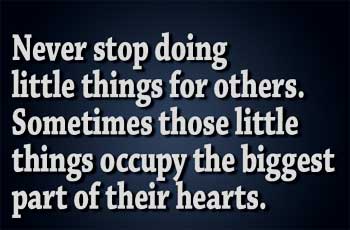 Once upon a time there was a village which was facing great poverty. One day three rich men and their servants were traveling on the same road, on their way they came to this poor village. Seeing the poverty of village all the three men thought of helping the people of village.

The first man couldn’t see their poverty so he took all the gold and silver from his wagons and shared them among villagers. He wished them all the best and left.

Second rich man seeing poverty and condition of village decided to help them. So he gave away all his food and drink as he thought that money couldn’t be of much use to them. He made sure that each one in village get fair share and get enough food that would last for time. Then he left.

Third rich man, after seeing the poverty of villagers speed-ed up and traveled straight through the village without stopping.


Other two rich men saw this from distance and commented with each other that how third rich man lacked decency and compassion and it was good that they helped those villagers.

Three days later, Other two rich men met the third rich man who was not traveling in opposite direction. He was still in speed but his wagon was now full of farming equipment’s, tools and sacks of seed and grains. He was heading to the village of poor people to help them out.

There are some generous people who give only so that people can see how generous they are but in reality they don’t want to know anything about people whom they are giving.

But Some generous people: best kind. To them it doesn’t matter what other would think of them. Not they give in showy way. Instead they truly worry and think about best ways to improve life of those whom they are helping. They give things much more valuable than money that their time, vision and their lives.

Moral:
If we see someone in need we should try to know their problem and find the best way to help them.

One thought on “Three Rich Man and Their Kindness”