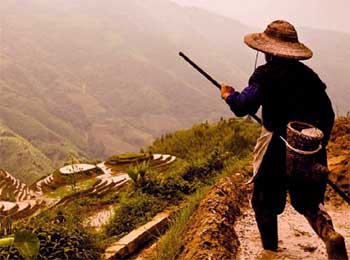 Once a young newly wedded couple lived in a small farm. They were poor and there were not any job around for man to do.

So one day, husband said to his wife, “My love, For work i have to leave house and travel far away to get a job so that i can earn enough to give you a comfortable life that you deserve.

While i am gone, i won’t be in touch with you and i don’t know how long i will stay away. I just want to ask one thing before i leave. That is Please wait for me to return. Don’t ever betray me. Will be faithful to you even if i am gone.”

Young man left and walked many days until he reached a big city. There he looked for people who were in need of help. At last he found a employer.


Before getting started with his work, he discussed terms of his employment.

He said, “Let me work as long as i want and when i think i should go home, please relieve me of my duties.

I don’t want to receive any salary during my work time, Please save it with you, for me until the day i leave. Day i leave, please give me all money i earn during my work here.”

Employer agreed. Young man was hard worker. He never took any holiday and didn’t gave any reason for complain to his employer.

Years went by and After twenty years, one day man came to his employer and said, “Sir, i want to leave. I have to return home now. Can i have my wages?”

Employer replied, “Sure but before you go i want to offer you something.”

Employer said, “Here is offer: I will give you all your money and send you away or i can give you three pieces of advice for your life and send away but without money. Choice is yours to make.”

Man asked for time to think. He thought hard to two days. He knew that he would lost all his hard earned money if he ask for advice. At last he decided and went to his employer.

He said, “I want three pieces of advice.”

Employer reminded him that if he ask for advice then he won’t be getting any money.

Man replied, “I have lived with you and learned everything from you. That is enough. I shall be able to make a good life with all the experience. I only want the 3 pieces of advice.”

Employer then told him three advice:
1. Never take shortcuts in your life. Shorter or unknown paths can cost your life.

2. Never be too curious, for curiosity towards evil can be deadly.

3. Never make decisions in moments of anger or pain because when you repent it could be too late.

After this employer handed him three loaves of bread and said, “two are for you to eat during journey and last one that is packed separately is for your wife. Eat it with her when you get home.”

Man thanked his employer and left for his home.

On first day of travel, he meet a old man who greeted him and asked, “Where are you going?”

He replied, “To a distant place. I would take about 20 days to reach if i continue walking.”

Old man said, “Oh, this path is too long. I know a shortcut that is safe and you will be able to arrive at your destination in five days.”

Man wanted to reach home early, so he began to follow path suggested by old man until he remembered advice from his employer.

Just then he returned to his previous and long path and followed it.

Days later he got to know that that shortcut was way for robbers to trick people into going through that path so that they can ambush travelers there and take all their belongings.

After few more days of travel, he found an inn by roadside. He went to inn to rest for night and paid for room.

After taking a bath, he lay down sleep but during night, he woke up hearing a terrifying scream. He went toward door to check what happened. As he was going to open door, he remembered second advice. Therefore, he returned, lay down and slept again.

Next day he asked owner of lodging if he had heard scream at night. Owner confirmed it.

Owner asked, “Didn’t you check out for what’s reason for scream? Weren’t you curious?”

At this owner replied, “You are one of few guests who managed to leave this inn alive. We have heard that in night, a demon shouts and scream to call attention of wayfarers and when curious guest go outside to check, he drags them to forest and kill them.”

Man was saved again. He thanked God and continued his journey.

After many days and night of walking, he was tired. Finally he saw sight of his house from far away. He was very happy to see it.

It was night, he saw some light coming out of window of his house, he was able to she his wife but then he saw that she was not alone. When he came closer he saw that there was a man with her and she was softly caressing his hairs.

When man saw that scene, his heart was filled with anger and wanted to kill both of them mercilessly. But then he remembered third advice and took deep breath and stopped.

He decided to sleep outside house that night. He slept in midst of bushes, determined to make decision next day.

A dawn, when he was calmer, he thought, “I will not kill my wife and his lover. I will go back to my employer and work there for rest of my life. But before leaving i want to tell my wife that all these years i was faithful to her.”

Man went to front door and knocked. When wife opened door, she recognized him and cried, embraced him warmly.

Man tried to push her away but was not able to.

With tears in his eyes, he asked, “Who is the man that you were with, yesterday?”

She said, “That is your son. When you left, i discovered that i was pregnant. Today, he is twenty years old.”

Hearing that man cried and thanked his employer for all his advice.

Then wife called out for his son who was asleep. Man ran in and hugged his son. Then he told them all about his experience he had while he was away.

He finally told them of the employer and his 3 pieces of advice. He then put the last loaf on the table saying, “This is all that i have earned in twenty years.”

Wife smiled and said, “That’s enough. I am happy that now we will be able to live together.”

Then for dinner, wife broke bread and when looked inside, they found that bread contained gold coins that was much more than right amount of payment for man’s twenty years of hard work and dedication.

One thought on “Three Pieces of Advice – Man’s Wise Choice”