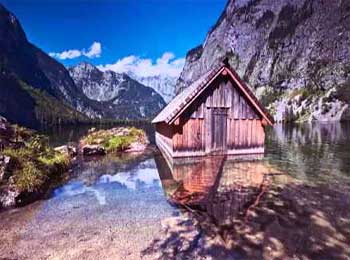 
Once three monks were sitting by a lake, deep in meditation.

Just then one of them, stood up and said, “I seem to have forgotten my mat at home. I should go back and bring it.”

Stepping on to the waters before him, he walked across to the other side, where their small hut stood.


He went inside, took him mat and returned back by lake, where other two monks sitting.

When he returned, second monk stood up and said, “I just remember, i haven’t dried my washed my clothes.”

Saying this he too, strode calmly across the water to the other side of lake and then returned in few minutes, same way.

Third monk watched all this intently. Figuring that this was test of his own skills. He loudly declared, “So, you both think that your abilities are superior to mine..!! Watch me..!!”

Saying this he scurried to the edge of river bank. No sooner did he put his foot in than he fell into waist-high water.

After watching this performance in silence, one of his fellow monks asked the other, “Should we tell him where the stepping stones are?”


Once an Emperor went to an Old zen master and said, “What happens to an enlightened man after death?”