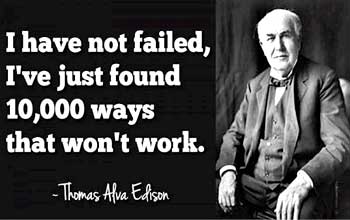 One day Thomas Edison came home and gave a paper to his mother. He told his mother that his teacher gave this paper to him and said, “Give this to your mother.”

His mother open it and read the paper. After reading paper her eyes filled with tears. Thomas asked his mother about what was written in the paper.

She read the whole letter in loud voice to her son, “Your son is a genius. This school it too small for him and we don’t have enough resources and good teachers to train him. Please teach him yourself.”

After many years, Now Edison’s mother died and he has become one of the greatest inventors. One day while Thomas was looking into old family things he saw a folded paper in the corner of his desk drawer. He took it and open it.


He read the paper. “Your son is mentally ill and we won’t let him come to school anymore.” was written on the paper.

It was the same paper which was given to him by his teacher in school to give to his mother.

After reading that Edison cried for hours and wrote in his dairy, “Thomas Alva Edison was an addled(mentally ill) child that, by a hero mother, became the genius of the century.”

Moral:
One should Never Give up. We need to be confident in ourselves and move ahead in life with Positive Attitude and Hard work.