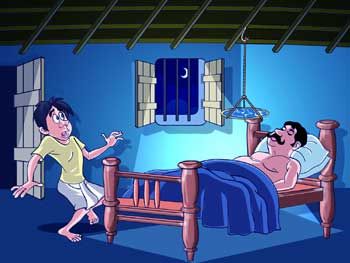 In ancient times, there was a school to train local police. Students from many kingdoms came there to study.

One of his students, took these words seriously and became an expert in art of catching thieves by becoming a thief mentally.

His Guru was pleased with him.


One day, student asked, “Is there anything more i have to master, Gurudev?”

Guru ji replied, “Yes, you still have something more to learn but only one person can teach you, that is Inspector of Mysuru.”

Student decided to leave for Mysuru next day. He remembered that his Guru ji said that Inspector will not teach you if you simply ask him to teach you but if you steal something from his home and hide it somewhere. Then you can learn by watching master thief catcher, how he goes about finding the treasure you hide.”

Inspector received him with honor due to a guest. He invited student for dinner and stay for night.

During dinner, he was served food on a large golden plate. Student expressed his admiration for golden plate.

Inspector then asked him about his studies. Student replied, “I want to be a great thief catcher like you.”

Inspector smiled and said, “Sure but first let me see whether you are god thief first.”

Student was determined to show, how good he was at stealing. He decided to steal that gold plate in which food was served.

In dead of night, when everyone was asleep, he got up and started looking for golden plate. He looked for it everywhere. Finally, he entered Inspector’s bedroom, there he found that plate was hanging above Inspector, who was sleeping like a log.

Student could easily reach plate but thing was plate was filled with water to brim. If he removed plate, water would spill on Inspector, waking him up. So, e had to find a way to steal plate without waking up Inspector.

He thought of plan and got plate, now he had to find a place to find it, so that Inspector couldn’t find it. Again he thought of a plan and hid plate in safe place and went back to his room to sleep.

In morning Student got up and had bath. Host invited him for breakfast. When breakfast was served, he was surprised to that it was served in same golden plate!!

Student asked, “You said, you had only one golden plate.. Right?”

Inspector replied, “yes. But why did you ask?”

Student finished breakfast in a hurry and as he was prepared to leave, his host escorted him to door.

Just then student stopped and said, “Don’t you offer a gift to your guest?”

“Oh, yes. What would you like to have? But don’t ask for golden plate”, he said and broke into laughter.

Student said, “No, I don’t want that but can you tell me how did you trace it?”

Inspector replied, “All right. I will tell you but only if you first tell me how you stole it. As no thief has ever been able to stole from my house.”

Student agreed. He told him, “When I found the plate was filled with water to its brim, I knew I could not touch it without spilling it. So, first I had to get rid of the water. So, I drank up the water.

I went out of the house and found a bamboo straw. Using the straw, I sucked up all the water. I removed the plate and hid it in a safe place. I mean what I then thought was a safe place.

Now, please tell me how did you find it?”

Inspector said, “Well, I woke up early in the morning and was quite shocked to see only ropes dangling above. The plate gone.

I immediately knew that i was your work but where was proof. So i had to find stolen plate.

I came to your room where you were sleeping peacefully. I noticed your feet were somewhat wet. I sat next to you and examined you closely. I could see you were wet right up to your waist. I knew in a flash where you had hidden the plate.

I went straight to the lake close to our home and started wading into the water. I kept wading in the water till it came to my waist. I walked a little further, as I’m slightly shorter than you. Then I dipped into the water. And there it was  – the golden plate. I brought it back home.”

Student said, “Thank you. I have learnt from you, how to read a thief. Now, i want to be a great thief catcher like you.”

Saying this, Student took his leave and went back to his school.