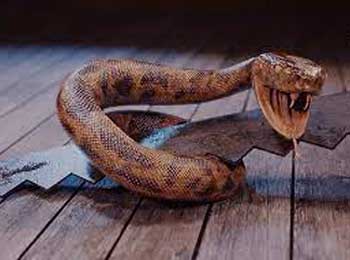 One day a snake entered a carpenter’s workshop. It was dark in there. When snake moved it collided with something and got slightly injured. Because of this snake got angry and lifted its hood.

He tried to bite the thing which had hit him. In this effort he also injured his face.

Then not understanding what was happening to him and thinking that thing was trying to attack him, it decided to roll around that thing as if wanting to suffocate him with all its strength.

Unfortunately this time snake whole body was covered in blood and it couldn’t move anymore.


Next day in morning, when carpenter entered his workshop, he found snake wrapped around a sharp saw, dead.

Learning:
Sometimes, we react in anger, thinking about hurting those who hurt us but unknowingly we are hurting ourselves only. Therefore, sometimes it is better to ignore such people and situation because reacting to them can bring consequences which are irreversible and catastrophic.

You May Also Like: Monk Meditation and Disturbance – Anger Story