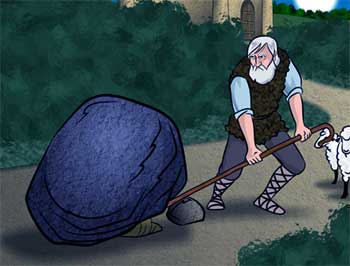 It was reign of King Paul. People lived happily under his reign. He was so conscious about keeping them happy and considered the people in his reign as his own family. He took utmost care to fulfill every need of his fellowmen.

However, often, King Paul used to hear tantrums from his court men that people in his kingdom are bullying him for various reasons and seem to be dissatisfied for nothing. He decided to find out what make his fellowmen feel displeased. One day, he decided to take a round visit to examine what the people concerned about him. He started his travel to visit the towns and cities in disguise. He could not see any men unhappy and this made the king so happy. It was half way through the journey and he was delighted to see happy men.

He decided to place a huge Rock on the mid of the road to test the people who pass by the road. His soldiers placed a huge rock on the road and all of them got hidden in the nearby place to watch what happens next.

The rock almost covers half of the road and caused a disturbance in riding vehicles. Many wealthy people in his reign came by the road; still they simply walked around the boulder. Nobody really seemed to be cared about the rock disturbing the movements of vehicle.


There were some of the wealthiest people who pass by the road. Also, King’s court men also saw the rock and did nothing to move it away from the middle of the road. In addition, they bad-mouthed about the king for not maintaining the road properly. These are the people who king believed to be his loyal group and well-wishers!
The king was shocked to hear these words.

A fruit seller passed by the road with his loads of fruits. He stopped himself when he saw the huge rock. Then he put aside his burden, and tried to move the stone. After several attempts of pushing, lifting and moving the rock, he succeeded in removing the obstacle from the road.

He saw a huge bag placed under the rock. He took the bag and was extremely surprised. The bag had a note saying, ‘Here is the gift for you! It has 1000 gold coins and it is for the one who removes this obstacle from the road!’
The fruit seller was so happy and he was invited by the King for a feast and rewarded nicely.

Moral:
Every obstacle we face in our life has an opportunity!

One thought on “The Rock in the Road Story…”