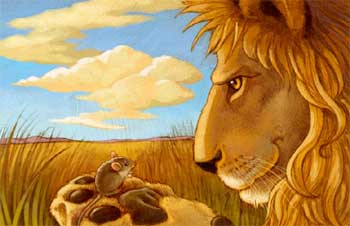 Story 1: The Lion and The Mouse Story

Once in a forest lived very strong lion. One day while lion was sleeping under tree a mouse came and started playing near him. Few minutes later mouse started to play on lion’s body and pulled lion’s whiskers. Lion woke up because of this and caught mouse in his hand and was going to kill it.

As lion was going to kill it, mouse apologized to lion and requested him to release him. Lion felt pity on him and set him free. Mouse was relieved but before leaving mouse promised lion to help him in need.

Listening to this lion laughed and said, “You are so little, how can you help me?” Laughing, he let the little mouse go.


Few days later while mouse was moving around he saw same lion under a net. He went near lion and saw that lion was badly trapped because of that net.

Mouse said, “Don’t worry sir, I will help you.” and then mouse started to cut net with his sharp teeth. Soon lion was freed from net. Lion was happy and thanked mouse for his help. After that they became very good friends.

Moral:
We should Never Look Down on Others because even little ones can be of great Help at times. 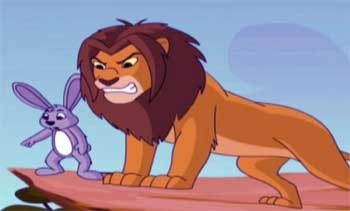 Once in a jungle lived a very big lion (king of all animals). One day lion called a meeting of all animals and said to them that it was their duty to feed him. So he ordered them to make arrangements and send daily one animal to him as his food. Everyone was frightened of him so couldn’t oppose his order. Every day all animals in forest would gather to decide about animal to be sent to lion as his food.

All animals in forest were scared but no one had courage to do anything about it. One day a rabbit came and he got to know about situation there. He asked other animals to send him as food for lion. All animals were shocked to hear him but didn’t oppose. So it was decided that rabbit would next to be sent to lion.

Next day when it was rabbit turn to go to lion. He got late which made lion angry. When lion roared and asked him about reason for being late.

Rabbit replied, “Sir, i was late because i met a new lion on way here. He said he was king of jungle and strongest of all.”

This made lion more angry and he asked rabbit to guide him to the place where he had met new lion. Rabbit took lion to a Well and asked lion to look into it. In Well lion saw his own reflection and thought it was another lion. To attack it he jumped into well and died. Because of clever thinking of rabbit every other animal was saved.

Moral:
We should not give up even in worse situations and think about solution. If there is someone stronger than us even then we should look for solution because Mental strength is more powerful than physical strength.

Search keywords: The Lion and The Mouse Short Story – Lion and Rabbit Story, Tales of Panchtantra Moral Stories for Kids and Students

One thought on “Lion and Mouse Short Story”