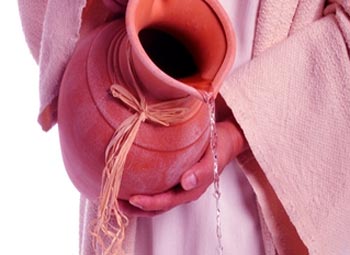 Once in a far away village, lived a young boy who used to live with his step-family. There was scarcity of water in the village so people had to go stream of water at end of village to fetch water.

Young boy used to wake up early in morning to get water from the stream for himself and his family. Sadly for him it was difficult task as the way was long and he alone had to walk there in morning and evening.

While he was given such difficult task his siblings were given lenient task or none Yet young boy had no hard feelings for his step-family members.

Once boy was coming back home from stream with pot of water. On his way back he saw an old man resting under a tree.


Seeing boy holding water pots, old man begged him for water to quench his thirst. Boy gave him water from the pot. Later on his way he met a lady who asked for water, boy gave water to her too and walked to home.

Boy’s water pot got half empty because of it his step-mother got angry with him for bringing only half filled pot’s of water that wouldn’t be enough for family.

This would now happened almost everyday that people on way would ask him for water and he gave them despite knowing that his step-mother would get angry with him and even torture him for bringing half filled pot of water.

One day he was not able to bear anger and torture from his step-mother and swear that hr will not give water to anyone on the way back to home. That day again while he was coming back from stream, he saw a man who seemed injured and that man asked boy to give him some water.

Boy remembered that he vowed not to give water to anyone on way.. He thought and hesitated but at last he couldn’t left that man thirsty there, so gave him some water from the pot and helped him.

When he got home, his step-mother saw half filled pot and this time pounced on him with more cruelty and started beating him.

Next day, someone knocked on the door. Boy opened the door and saw that man standing there with mails. He was the same man who he helped previous day and gave water. He was delivery man who came to village to deliver mails but got injured in the way.

Man gave him the letter of scholarship from college for which boy had applied with letter delivery man also gave him some cash thanking him for saving his life.

If boy hadn’t helped him there, he delivery man could have died and his letter of scholarship would have never reached him.

Moral:
Your everyday Good Deeds never go in Vain as they will Return to you when you least Expect them..