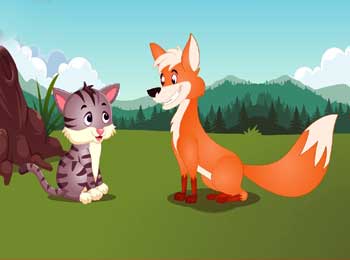 A cat and fox were very good friends. They used to spent time together and used to pass their days with great fun.

Fox considered himself very clever and whenever there was talk of cleverness, it would not leave any opportunity to humiliate cat.

Cat sometimes felt bad but due to friendship didn’t said anything.

One day both fox and cat were resting in shade of tree after lunch and started talking.


Fox said, “What if suddenly a predatory animal attacks us.. then what can we do to protect ourselves?”

Cat said, “I only know one way to save myself such situation. I will do that only.”

Hearing this, fox laughed and said, “Just one way!! You only know one way.. Look at me, i know a thousand ways. If you say, i will tell you two or three more ways..”

Cat said, “No, what will i do knowing more ways.. What i know, has proved to be effective so far. I will use that to save myself.”

“Yeah.. I can understand.. you will have hard time learning more methods. It’s difficult for you because you are not intelligent enough.”, saying this fox started laughing again.

Cat felt bad and said, “Whatever.. I will use same way, i have been using till now to avoid dangerous situations.”

Suddenly at that moment, a hound came running towards them. Both cat and fox got scared and knew if they don’t find a way to escape then they will be killed right there.

Cat knew only one way to save itself in such situation and did that only, it instantly climbed on a tree. Where as fox who knew thousands way, couldn’t decided what way to use to escape from that hound.

And just when fox was thinking of way to escape without acting on any of them, hound jumped on him and killed him.

You May Also Like: Farmer and Fox Story – One Moment of Anger

Search Keywords: The Cat and The Fox Story – Aesop’s Fable,  Animals Short Story with Moral for Kids, Aesop’s Fable for Kids to Learn