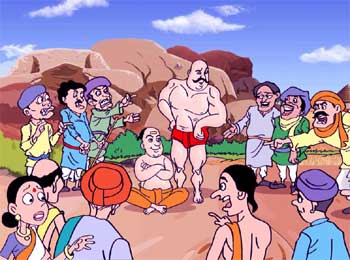 Once Tenali Raman and his wife were on their way to Capital of Vijaya nagar. On way, they were passing by a village at foot of a hill.

There they saw that villagers had gathered on front of village temple. They became curious and pushed through crowd to see what’s happening.

They saw that a weight lifter was exhibiting his strength and was seen carrying a huge bag of granary on his shoulder.

Man standing next to Raman said, “Weight lifter is carrying a bag of 500 quintals of rice.”


Raman replied in loud voice, “This is nothing. I can carry a thousand times more weight.”

Startled by this announcement, body builder dropped bag, he was carrying and looked a Raman.

Getting attention, Raman addressed crowd. “Why, i can carry that hill on my bare shoulder.”, he said, pointing to hill near by.

Villagers gaped at him. Raman’s wife got tensed.

Meanwhile, weight lifter had recovered from his wit and laughed aloud and said, “Is that so? Then let’s see you do it.”

Villagers were now excited and wanted to see Raman do it.

Raman said, “I said i can do it. But did i say i will do it now? Carrying a hill requires a lot of preparation.”

Then turning to weight lifter he asked, “How much time did you take to prepare for this feat of carrying sack of rice.”

Without batting eyes, Raman said, “Six months. I need to eat enormous amount of food to build my muscles and i need someone to massage my body daily and because we are outsider, we need a place to live.”

Just then village chief got up from his chair and said, “Ok then. All arrangements will be made and we will meet here, exactly six months from now.”

Raman’s wife was relieved that they wouldn’t have to worry where food would come from, for next six months.

For six months, Raman led a royal life in village. He got everything he asked for.

Soon, it was D-day. Whole village assembled at foot of hill. Raman and his wife also arrived at decided place.

Rmana stood in circle with people seated all round and then he sat in warrior position and announced that he was ready.

After a while, village chief became impatient and asked, “What are you waiting for?”

“I am waiting for your man to place hill on my shoulders”, said Raman calmly.

Everybody gaped at Raman. Village chief shouted in anger, “You said…”

Before he could complete his sentence, Raman cut him short and said, “I said that i will carry hill. Even now i am willing to carry hill but i am waiting for your men to place it on my shoulder.”

“But who will lift the hill?”, asked village chief in bewilderment.

Just then Raman’s Wife said, “Only Hanuman ji can lift it.”

Village chief understood what happened and he joined his hands in salutation to Raman and said, “A man of your strength and determination should carry not a lowly hill but Mount Kailas.”

After this Raman and his wife packed their bags and left for their journey.