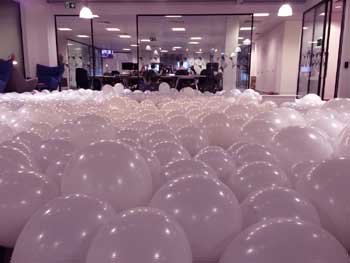 Once in a company, around team of 40 employees from different departments were working together on a project.

Team consisted of bright and enthusiastic young members but problem was that they wouldn’t share information with each other and it was a problem.

So one day project head, invited them for a event at company. In this event there were several fun activities organist for everyone.

For one of activity Project head brought team into a room which was full of fun decorations and hundreds of balloons.


In center of room was a big box full of balloons that had not been blown up yet. Everyone was excited and were guessing about what kind of activity it could be..

Project leader took mic and said, “Each one of you pick up a balloon and blow it up.. Then write your name on it..”

All members were able to get their names on balloon without popping any balloon. When everyone was done, project head asked them to leave their balloons and exit room.

Few minutes later, team was asked to come back into room and were told that they had to find balloon they left behind with their own name on it among hundreds of balloons scattered there.

As there were hundreds of balloons with just 40 balloons with names on it, so project head told warned them that first three to find their own name balloon will be winner and if any of balloon pop then person responsible for popping that balloon would be disqualified.

Carefully everyone tried to find out balloon with their own name on it but even after 20 minutes not even a single person was able to find their balloon. Project head came and told them that this round was over and everyone should go for next round of activity.

For next round project head told them that, if any team member find any balloon with name on it then give it to person whose name was on it..

Everyone did same and with in couple of minutes every member of team had their own balloon with their own name on it.

At end of this round, project head came sand said, “You can now understand that We are much more efficient when we are willing to share with each other and we are better problem solvers when we are working together, not individually.”

Moral:
Often times members of teams create obstacles that get in the way of teamwork by solely focusing on their own pursuits and goals. They hoard information, avoid collaboration and distance themselves. It is bad for the team and it is bad for that individual.

Every member of a team should ask themselves on a regular basis what they are doing for the team and can do for the team.

One thought on “Balloon Activity for Team Building..!!”