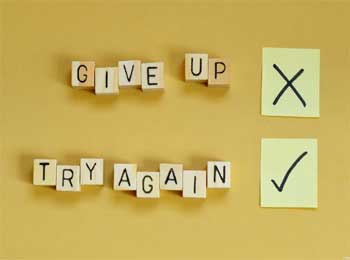 Ramu started a business with great enthusiasm but just after few months, his business went under.

After that, time passed but Ramu didn’t started any new work. His teacher got to knew about his situation and called him to his home.

Teacher welcomed Ramu and they talked for bit about each other well being.

Then teacher asked, “Why don’t you start doing some other work?”


Ramu replied, “I started a business. I worked so hard, i gave my everything to that work. I worked 24 by 7 and yet that business failed.”

Teacher tried to console him saying, “But that’s life, sometimes we get success at what we do and sometimes we don’t. This doesn’t mean that we stop working..”

“What’s point of doing work, when i can’t be sure of success.”, Ramu replied with bit of annoyance.

Teacher took Ramu to a room and showing him a dead tomato plant he said, “Look at this..”

Ramu was confused and said, “It’s dead, useless. Why are you showing it to me?”

Teacher replied, “When i sowed it’s seed, i did everything right for it. I watered it, fertilized it, sprayed it with pesticide. I took great care of it but it still died..”

Teacher stop for a bit and then said, “Doing Work is same.. No matter how hard you try, you cannot decide what happens in the end. Only you can control only those things which are in your hands and you should leave the rest to God.”

Ramu asked, “But if there is no guarantee of success then what’s use of trying doing anything?”

Teacher said, “Many people do not try to do anything big in their life thinking this..”

“What’s wrong in thinking that… When even after giving so much hard work, so much money, so much time, if success is only a matter of chance, then what is the use of doing so much.”, said Ramu and was about to leave.

Just then teacher stopped and said, “Before you leave, i want to show you one more thing..”

He took Ramu to another room and opened door. There was pile of big red tomatoes lying there..

Ramu asked, “Why are you showing me this?”

Just then teacher said, “These tomatoes you see are result of not giving up on growing plants even after failing before. I didn’t stop, after seeing those dead plants.. I again sowed seeds and took care of them and this time plant grew..

Similarly, If you keep doing the right things consistently, your chances of getting success are greatly increased. But if you give up because of one or two failures, then life does not give you any reward.”

Ram Singh had now read the lesson of success, he understood what he had to do now and he left with a renewed vigor.

Learning:
Like Ramu, many people make their Failure as a reason for Not trying further. It is true that no matter how hard we try, we cannot Control what will be the end result.

But it is also true that those who keep trying continuously to get success, they will get it tomorrow if not today.

As it is said – Remember that every failure is a step towards success.

You May Also Like: Trouble in Life? Trust God – Husband Wife Story

Search Keywords: Teacher Lesson about Failure – Try Again, Motivational Story to Teach people Why not to Give Up, Try Again Short Story, Story to Motivate One to Never Give Up Even After Failure, Secret to Success Short Motivational Story, Teacher Student Story, Keep Trying to Get Success Story