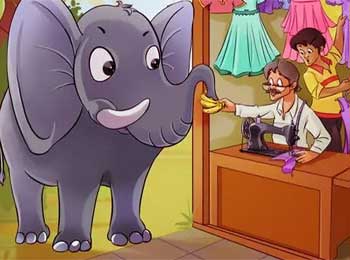 Once in a village, lived a good nature, kind and friendly tailor. All villagers would come to him to get their clothes stitched.

Soon they became close and in return elephant would let him ride on his back several times. Villagers were also surprised to see closeness of those two.

One day tailor had to go out for some work. In mean time, his son was to handle work at shop. Before leaving, tailor gave his son banana and told him that elephant would come and he should feed him that banana.


Tailor’s son was very mischievous. As soon as tailor left, he ate banana himself. Later, when he saw elephant coming, a mischief struck in his mind. He took a needle in one hand and banana peel in other hand.

He went to elephant and extent his hand showing banana peel. Elephant thought that he had come to give him banana, so extended his truck. But as soon as elephant grabbed that peel with his trunk, tailor’s son pricked him with needle.

Because of needle prick, elephant cried out in pain. Seeing this, tailor’s boy was happy and started clapping.

But before he could do anything, elephant extended his trunk and poured mud all over him. Now, boy was covered in mud from top to bottom. All the mud was also spilled inside shop and all clothes kept in shop also got dirty.

At same time, tailor came back to shop and saw his son and shop covered in mud. He couldn’t understand what happened, he asked his son.

His son told him whole thing.

After listening to him tailor felt sorry for elephant and apologized to him and stroked its back. Elephant was not angry anymore and calmly went away.

After this tailor went to his son and said, “You have treated elephant badly and that’s why he treated you same way. Therefore, don’t do bad or wrong to anyone ever.”

Tailor’s son understood his mistake and promised to never mistreat anyone ever again.

Learning:
Treat others, the Way you Want others to Treat you.

You May Also Like: Painting at Crossroad – Pointing Others Mistakes