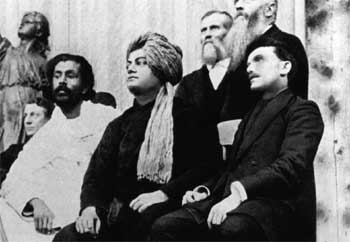 Story 1: Converting a Situational Set up into an Opportunity

Once a Cristian missionary invited Swami ji to his house and took him to his personal library. Missionary self applauded his library bring Swami ji to books shelf and mockingly, “How you found the order of books here.”

Swami ji was astute on observing things and events around. Swami ji saw several religious books place one over another but couldn’t find Srimad Bhagwat Gita.

When his eyes reached bottom of book racks, he saw Srimad Bhagwat Gita was kept last and above it all other religious books were kept and Bible was kept at top.


Swami ji smiled and said to missionary, “I am very happy to you all know the truth and respected Srimad Bhagwat Gita, giving due importance.”

Christian missionary was trying to demean Srimad Bhagwat Gita but response of Swami ji converted that iniquitous trick into opportunity to give respect to our pious Hindu past and Vedic history.

While Swami Vivekananda was in America, while passing through a bridge, he saw that some boys from the bridge were trying to shoot egg shells that were floating in the water below but they missed every time they shoot.

Swami ji were watching all that from a distance. After watching this for sometime, he went close to them and took asked boys for gun. Boys hesitated but then gave gun to Swami ji

Swami ji fired twelve times and every time he fired, he hit egg shells. Boys were surprised to see that a monk was able to shoot gun with such precision.

Inquisitive boys were surprised to see this and asked, “How were you able to do this?”

Swami ji replied, “Whatever you are doing, put your whole mind to it. If you are shooting then your mind should be only on the target only then you will be able to do this. Once you learn to focus your mind on target then you will never miss it.”

Moral:
We should Learn to Focus our Mind and then we will be able to Achieve whatever we wish and Aim for.

You May Also Like: Why Swami Ji Wear Saffron Turban