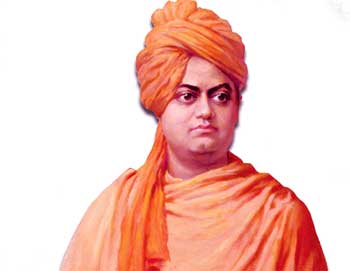 By luck just in first meet itself, she got a chance to meet Swami ji in person. When she meet Swami ji, she praised him and said, “I want to marry you..”

Swami ji was surprised and asked her, “Why you want to marry me??”

Swami ji bowed at the feet of that lady and said, “Why to think of replicas?? When original one is there to become your son. From now.. You are my Mother..”

Lady felt ashamed of her thinking and felt guilty. Later on she became one of the followers of Swami Vivekananda ji.

Another story from Swami ji visit in America. One day Swami ji was walking on the street of Chicago in his saffron attire, two long pieces of cloths wrapped around his body like a sadhu.

For Americans that kind of attire was unfamiliar. A couple was passing along same street and on seeing Swami ji, woman whispered to her husband, “I don’t think this man is a gentleman..!!”

Couple was taken aback with such response and felt bad for their remark.