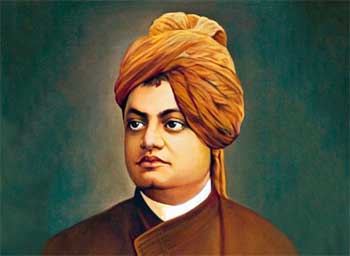 One day, Swami Vivekananda was returning from temple of Ma Durga. Path was very narrow as on one side it was covered by large water tank and on other side there was a high wall.

As Swami Vivekananda took a step forward, monkeys got close to him. Swami ji began to run and monkey started chasing him. Faster Swami ji ran, bolder monkey got and tried to catch him and bite him.


A time came when Swami ji felt that it would be impossible to escape, just then an old Sanyasi called out and said, “Face them..!!”

Those words brought Swami Vivekananda to senses and he stopped running. Swami ji turned back to boldly face those monkeys.

As soon as Swami ji did that, those monkey fell back and left.

Moral:
We should not Run away from Difficulties, Instead Face them Boldly.

Once Swami Vivekananda ji was going on a trek in Himalayas, on his way he saw an old man who seemed exhausted and looking at the upward slope in front of him.

Swami ji went to him and stood beside him.

Man looked at him with helplessness look on his face and said to him, “Swami ji.. How do to cross it?? I can not walk anymore.. If i walk a single step more my chest will break..”

Swami ji looked at him and said, “Look down at your feet.. under it..  is the road which your have passed over.. and road you seem before you would be soon under your feet..”

Those words of Swami Vivekananda motivated the old man and he resumed his trek to successfully reach his destination..

Swami ji words meant that if you have came across such long way, you can do it again and again.. One can achieve it because he worked hard and did it before.

Moral:
Continue your Struggle and you will Emerge as Winner.

You May Also Like: Swami Vivekananda Ji Enlightenment Story

3 thoughts on “Motivational Stories from Vivekananda..!!”