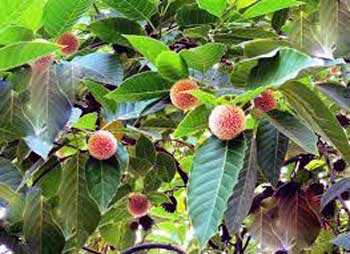 When Swami Vivekananda (Naren) was 8 years old, he loved Champaka flowers. He used to visit his friends house which had a big Champaka tree in compound of that house.

Swami ji loved to climb that tree and dangle head down from it branches.

One day grandfather of his friend saw Naren playing on the branches of tree and was afraid that child might get hurt if fall from such height. So he thought something and went near that tree.

Grandfather of friend approached him and said, “Naren, come down.. and never climb on that tree again.”

Grandfather said, “Because on that tree lives a Brahmadaitya (Ghost) who wanders around that tree at night.. and also breaks neck of anyone who climbs on that tree..”

Listening to this Naren nodded in acceptance and didn’t said a word. As soon as grandfather of his friend left, Naren started to climb on that tree again and started playing and dangle on it’s branches.

Naren’s friend asked him to come down saying that if he doesn’t come down then ghost will come and catch him.

Naren laughed and replied, “Don’t believe everything because someone tells you..! If that story was ought to true that my neck would have been broken long ago..”

Swami ji (Naren) was very bold and fearless from childhood and had strong common sense. He respected elders and what they say but he also had a strong instinct to verify the truth of something he had heard.