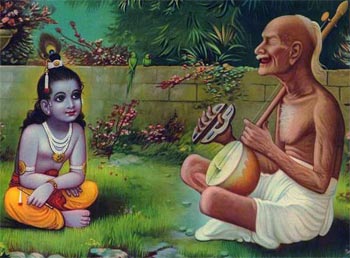 During Akbar’s reign, a great saint was born. His name was Surdas. He was born blind and because of that he was neglected by everyone during his childhood.

One day while Surdas was sitting in front porch of his house, a group of singer passed by his house singing praise of Lord Krishna. Surdas was moved by the music and joy he felt at that time.

So he decided that he will learn to sing. No one in his home liked him and took him as a burden due to which one day Surdas left his home all alone by himself.

Surdas would wander singing Lord Krishna’s praise. With time some people became his disciple who would serve him to the best of their ability. They would write and sing compositions with him.


One night, Surdas dream of Lord Krishna. Next day when he woke up he was convinced that Krishna was calling to him. He decided to go to Vrindavan.

On his ways to Vrindavan, Surdas would sing song in Lord’s praise. Wherever he went people would respect him and feed him. They would request him to stay there with them but Surdas humbly refused everyone.

One day while he was resting at the edge of shallow abandoned well, he fell into it. Blind and injured he didn’t knew how to get out of it.

While stuck in well Surdas prayed for help and kept of singing song’s in his praise. After seven days suddenly he heard someone’s voice.

It was a child’s voice saying,”Hold my hands, i will take you out..”

As soon as Surdas came out of well, boy disappeared. Surdas kept searching for little boy who rescued him because he felt that boy was none other than Lord Krishna himself in his child form.

Moral:
If you will Believe in Lord Krishna by Heart then you will never be alone. Lord Krishna will always be there to Help you in you Troubles.