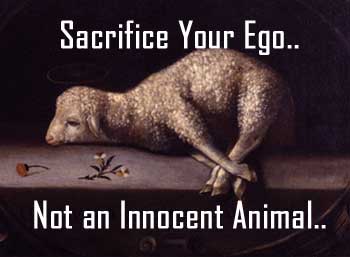 Once upon a time, Prince born to King was quite intelligent and had completed his entire study by age to sixteen. At this early age his father made him second in command.

In those days, most people were superstitious and they would pray to gods and ask special favors. They would make promise to God that if their prayers were answered then they would repay by making offerings to them.

In addition to flowers and food, they would promise to kill animals like goat, lambs, chicken etc as offering.

Prince saw all this and thought, “These helpless animals are also subject of King, so i must protect them. People commit these unwholesome acts due to ignorance and superstition in name of religion but this can not be true religion.

But i fear that these people believe in their superstitions too strongly and won’t give them up, which is sad. Perhaps i can find a way to use their belief to put to good use.

So, I must begin to make plan to let their superstition help them. I should make them learn that if they must offer sacrifice then let them kill their greed and hatred, not these helpless animals. Then from this whole kingdom will benefit.”

So prince devised a clever plan. Every often, he would rode in his grand chariot to banyan tree just outside city. This was tree where people prayed and made offering too. Every time prince came, people would see him offering things like flower, food, water etc but not animal sacrifice even once.

News spread about his offerings and people started to believe that he was also a true believer of God who resides in banyan tree.

In due time, King retired and Price was made new King. He started to rule Kingdom. He ruled as a righteous king and started schemes which would benefit people for his kingdom. because of this he was respected and trusted by his subjects as honorable king.

Then one day, he decided that it was right time to carry out rest of his plan. So he called all ministers and leading citizens of his kingdom to royal assembly and said, “Worthy ministers and my loyal subjects. Do you know how i was able to make sure that i would become a King?”

He continued, “Do you remember that i often went to Banyan tree and made sweet and wonderful offerings to God.”

Everyone replied, “We must prepare this sacrifice at once. What animal do you wish to kill as sacrifice?”

King replied, “My dear subjects, I am glad that you all are so willing to cooperate. Now i shall let you know what i promised…

I promised great God that i will offer flesh and guts as sacrifice of anyone who fails to keep himself from doing these things in my kingdom.

1. Anyone who destroys innocent life.
2. Takes what is not given.
3. Does wrong to others and speak falsely.

Being superstitious, all those in royal assembly agreed that everyone announcement should be made and anyone who was find doing any of these acts would be offered to God as offering for peace and safety of King and Kingdom.

Announcement were made throughout kingdom and everyone learned about it and didn’t dare to do anyone of these things.

King thought to himself, “Ah.. such power of superstition, that these people can not see that first step as to give up killing, if i sacrificed one of my subjects, i would be next on altar..! And such is power of superstition that i could make such promise and never have to carry it out.”

Moral:
Even an Wrong Belief can be used for Positive One if one Think Carefully.