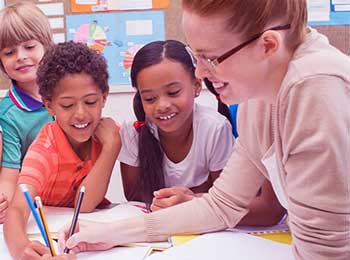 Once a first grade teacher thought of giving her class a fun assignment. Because Thanksgiving day was near, she asked kids to draw a picture of something for which they were thankful.

Many would celebrate holiday with turkey and other traditional goodies of season, so teacher’s thought were that it would be subject of most of her student’s art.

When she got art work of all student, she saw that a kid made a different kind of picture. That picture was made by kid who was shy and wouldn’t play much. He would depend on his teacher and stand close by her side most of time when other kids played.

When teacher asked to draw a picture of something for which he was thankful, he drew an empty hand. Nothing else, just an empty hand.


That art captured imagination of other kids, whose hand could it be?

Discussion went on. Teacher almost forgot about the young artist himself.

When students had gone on to another assignments, teacher went to that kid desk and bent down and asked him – Whose hand it is?

Little boy looked away and muttered, It’s your teacher.

Just then teacher recalled times, she had taken his hand and walked him here and there, how often she had said to kid – Take my hand and we will go outside. Let me show you how to hold pencil and many other things.

Kid was most thankful for his teacher’s hand.

Tears came from her eyes, brushing that aside she hugged that kid and went on with her work.

Learning:
In this world, People might not say thanks always but they will Remember the Hands that reaches out to them.

Therefore, keep Reaching out because you may pull someone out of Darkness and Guide them to Light.

You May Also Like: Number of Apples? Teacher Student Story