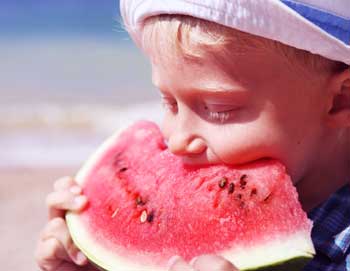 Once there lived a boy in a village of Parra in Goa which was famous for its watermelons.

Every year farmers would organize a watermelon eating contest at the end of every harvest season in May. Farmers used to invite kids from all over village to participate in the contest.

Farmer would keep best watermelons from harvest for kids to eat at contest. Kids were allowed to eat as many watermelons as they wanted Only condition for them was not to bite into seeds of watermelon and spit out all the seeds into a bowl.

Years later boy went to college. After completing his study boy came back to his village after 7 years.


Boy was very happy to return to his village and went to market looking for watermelons but there was nothing like before. All was gone. Watermelon that were available int he market were small. Boy came to know that contest was still held but things were changed now. Whole farming and contest things were now handled by farmer’s son.

Farmer’s son held contest even now but there was small difference. When farmer son took over, he realized that larger watermelons would fetch good money in market so he would sold the larger one in market and kept the smaller ones for the contest. This same thing continued for year after year and at last best watermelons were finished from the village.

What went wrong?? How did this changed??

Now when his son took over, he would kept the smaller ones for contest because of which next year yield watermelon were smaller, the year later even smaller.

In watermelon generation was one year but village best watermelons were finished in 7 yrs.

Moral:
Human generation changes after 25 years but it will take us 200 Yrs to understand what’s wrong with Education system.

Today’s generation scrap or change older traditions without realizing and understanding deeper value and meaning of those traditions.

Change is good but first We should try to understand why we need to make change.

11 thoughts on “Story of Watermelon.! (Must Read)”