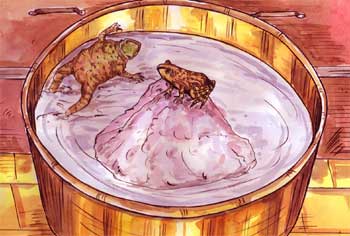 In a pond lived two frogs. One day while playing on a rainy day slowly they hopped and hopped entered a house.

As they hopped more they fell into the large tall can of milk. Both frogs were sinking inside the can.

Both frogs tried to swim and get out of can for sometimes but all went in vain. One of the frog got tried and lost hope and said, ” I cant swim anymore.” And drowned in to the bottom of can.

Other frog didn’t give up and kept on swimming. After sometimes because of his movement the milk turned into butter. The from climbed on pat of butter and hoped out of milk can.


Moral:
Never lose Hope. As there is saying God help those who help themselves.