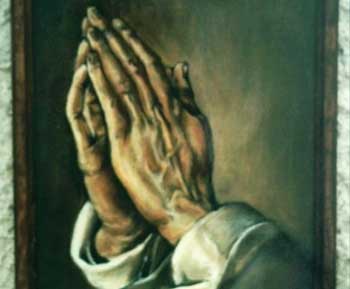 In fifteenth century, There was a tiny village near Nuremberg. A family with 18 children lived there. Eighteen!! just to provide food for family the father and head of family, goldsmith by profession, worked eighteen hours a day.

Despite their seemingly hopeless condition. Two of Albrecht Durer and Albert the elder children had a dream. They both wanted to purse art but they knew their father will not be able to support financially both of them to study at academy.

After many long discussions both boys finally worked out a pact. They decided to toss a coin. The loser would support father in his work and other will get chance to go to academy and complete his four years studies. After completing the studies the boy who won the toss would come back and support his father and help other boy to complete his studies at academy.

On a Sunday morning they tossed a coin. Albrecht Durer won the toss and went off to Nuremberg. Albert went down into the dangerous mines and, for the next four years, financed his brother, whose work at the academy was almost an immediate sensation. By the time he graduated, he began to earn considerable fees for his commissioned works.


When the young artist returned to his village, the Durer family held a festive dinner on their lawn to celebrate Albrecht’s triumphant homecoming. Albrecht toast to his beloved brother for the years of sacrifice that had enabled Albrecht to fulfill his ambition. His closing words were, “And now, Albert, blessed brother of mine, now it is your turn. Now you can go to Nuremberg to pursue your dream, and I will take care of you.”

All heads turned in eager expectation to the far end of the table where Albert sat, tears streaming down his pale face, shaking his lowered head from side to side while he sobbed and repeated, over and over, “No …no …no …no.”

Finally, Albert wiped his tears and rose and said softly, “No, brother. I cannot go to Nuremberg. It is too late for me. Look … look what four years in the mines have done to my hands! The bones in every finger have been smashed at least once, and lately I have been suffering from arthritis so badly in my right hand that I cannot even hold a glass to return your toast, much less make delicate lines on parchment or canvas with a pen or a brush. No, brother … for me it is too late.”

One day, to pay homage to Albert for all that he had sacrificed, Albrecht Durer painstakingly drew his brother’s abused hands with palms together and thin fingers stretched skyward. He called his powerful drawing simply “Hands,” but the entire world almost immediately opened their hearts to his great masterpiece and renamed his tribute of love “The Praying Hands.”

Moral:
The next Time you see a Copy of that Touching Creation, take a Second look. Let it be your Reminder, if you still need one, that no one – No one – Ever makes it Alone!

2 thoughts on “Story of The Praying Hands Painting”