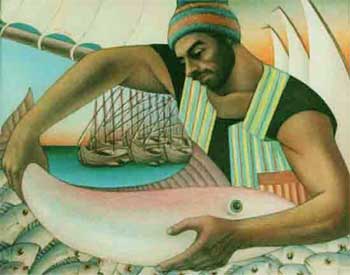 Once there was a king who wanted to give a great feast to his guests, He got all kind of dishes prepared for them but cooks were not having fish to cook. So, he offered a reward to anyone who can get fishes before feast.

After knowing about the announcement, a fisher man bought the fish to the palace. At the gate of palace there was gatekeeper who would let him go inside till fisherman promised him to split the reward.

Fisherman agreed. When king saw the fish he was very happy to get it as now his feast will be complete and was happy to reward a lot of money to the fisherman, but fisher man refused to take it.

Instead he demanded a hundred lashes on his back as reward. All were surprised. At last king ordered a servant to give him hundred lashes. When the fisherman had received fifty lashes, he asked to stop as he had partners in the business. It was the gatekeeper.


King understood the whole thing. He called the gatekeeper in court and gave him rest of fifty lashes and also dismissed him from the service. For the wise fisherman king gave a handsome amount of money as reward.

Moral:
Evil deed results in Bad Things And Your Wise thinking can help you get out of Situation. So be Wise and do Good.


You May Also Like: King and Sadhu Story..! (Search for Happiest Person)

3 thoughts on “Story of Fisherman and King’s Guard”