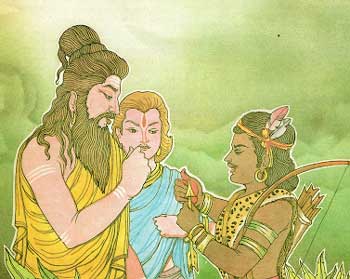 Long-era ago, In India lived a boy named Eklavya, son of tribal chief in the forest of kingdom Hastinapur. Eklavya was brave and handsome boy who was loved by all. His father saw that something was troubling him. Many times he saw his son lost in deep thought and other boys used to play and hunt for pleasure.

One day father asked his son, “Why are you so unhappy? Why don’t you play with your friends?”

“I want to be a Archer. I want to be a disciple of the great guru Dronacharya, the greatest tutor of Archery in Hastinapur. His Gurukul is a magical place where ordinary boys are turned into mighty warriors.”, He replied. “I know that we belong to the hunting tribe, but I want to be a warrior, father, not a mere hunter. So please allow me to leave home and become the disciple of Dronacharya.”, He added

His father knew it not going to be easy for him but he didnot want to refuse the only wish of his son. So, father gave his blessings. Eklavya set on his way to reach part of forest where drona taught the princes of Hastinapur.


When boy reached Drona’s gurukul and saw it was consisted of several huts surrounded by treesand an archery yard. There he saw a man standing near a tree busy instructing a boy. Though Eklavya had never seen Drona before, he put his guess at work. He went near Drona and bowed. The sage was surprised to see a strange boy addressing him. Who are you? he asked.

“Dronacharya, I am Eklavya, son of the Tribal Chief in the western part of the forests of Hastinapura.” Eklavya replied. “Please accept me as your disciple and teach me the wonderful art of Archery.”

Drona sighed. “Eklavya… if you are a tribal hunter, you must be a Shudra, the lowest social community according to the Vedic Caste System. I am a Brahmin, the highest caste in the kingdom. I cannot teach a Shudra boy” he said.

The innocent tribal boy was deeply hurt by Drona’s refusal to teach him. “It’s not fair!” he thought miserably. “God has given knowledge to all, but man alone differentiates his kind.” He left the place with a broken heart But it could not shatter his ambition to learn Archery. He was still as determined to learn Archery.

“I may be a Shudra but does it make any difference?” thought he. “I am as strong and zealous as Drona’s princes and disciples. If I practice the art everyday, I can surely become an archer.”

Eklavya reached his own forests and took some mud from a nearby river. He made a statue of Dronacharya and selected a secluded clearing in the forests to place it. Eklavya did this because he faithfully believed that if he practiced before his Guru, he would become an able archer. Thus, though his Guru shunned him, he still held him in high esteem and thought of him as his Guru.

Day after day, he took his bow and arrow, worshiped the statue of Drona and started practice. In time faith, courage and perseverance transformed Eklavya the mere tribal hunter into Eklavya the extraordinary archer.

One day while Eklavya is practicing, he hears a dog barking. At first the boy ignored the dog, but continuous disturbance in his practice angered him. He stopped his practice and went towards the place where the dog was barking. Before the dog could shut up or get out of the way, Eklavya fired several arrows in rapid succession to fill the dog’s mouth without injuring it. As a result it roamed the forests with its mouth opened.

As fate would have it, that day, Drona was instructing prince about some finer points of archery by making them learn in the real-life condition of the open jungle. As they were busy practicing, they suddenly chanced upon the “stuffed” dog, and wonder who could have pulled off such a feat of archery. Drona was amazed too.” Such an excellent aim can only come from a mighty archer.” he exclaimed.

He told the Pandavas that if somebody was such a good archer then he surely needed to be met. The practice was stopped and together they began searching the forest for the one behind such amazing feat. They found a dark-skinned man dressed all in black, his body besmeared with filth and his hair in matted locks. It was Eklavya. Dronacharya went up to him.

Drona said,”Your aim is truly remarkable! From whom did you learn Archery?” Eklavya was thrilled to hear Drona’s praises. How surprised he will be if he told Drona that he, in fact was his Guru! “From you my Master. You are my Guru,” Eklavya replied humbly.

“Your Guru? How can I be your Guru? I have never seen you before!” Drona exclaimed in surprise. But all of a sudden he remembered something. He remembered about an eager boy who had visited his Gurukul several months ago. ” Now I remember,” said he. “Are you not the same hunter boy whom I refused admission in my Gurukul some months back?”

“Yes, Dronacharya”, replied the boy. “After I left your Gurukul, I came home and made a statue like you and worshiped it every day. I practiced before your image. You refused to teach me, but your statue did not. Thanks to it, I have become a good archer.”

Hearing this, Arjuna became angry. “But you promised me that you’d make me the best archer in the world!” he accused Drona. “Now how can that be? Now a common hunter has become better than me!”
The other princes remembered their master frequently praising Arjuna that he had immense talent and will be the greatest archer in the kingdom. They waited with bated breath. What will their teacher do now?

Unable to answer Arjuna’s question, Drona remained silent. The sage too was upset that his promise to Prince Arjuna was not going to be fulfilled. He was also angry with Eklavya for disobeying him. So the sage planned to punish Eklavya.

“Where is your guru dakhsina? You have to give me a gift for your training,” the sage demanded. He had finally found a way to make Eklavya suffer for his disobedience.

Eklavya was overjoyed. A guru dakshina is the final offering from a student to the guru before leaving the ashram. The teacher may ask for something or nothing at all.

“Dronacharya, I’ll be the happiest person on earth to serve you. Ask me anything and I will offer it to you as my guru dhakshina “he said. “I might ask something you don’t like to give me. What if you refuse the dhakshina I want?” Drona asked cunningly.

Eklavya was shocked. It was considered a grave insult and a great sin if a guru’s dakshina was refused. “No! How can I, teacher? I am not that ungrateful. I’ll never refuse anything you ask, Dronacharya,” promised the unsuspecting boy.

Drona did not wait anymore. “Eklavya, I seek to have your right-hand thumb as my guru dhakshina” he declared. Silence befell on everyone. Everyone was shocked, even Arjuna. He looked at his teacher in horror and disbelief. How could their teacher make such a cruel demand? That too, from a mere boy?

For a moment Eklavya stood silent. Without his thumb he could never shoot arrows again. But the teacher must be satisfied. “Ok Gurudev, as you wish.” said he. Then, without the slightest hesitation, Eklavya drew out his knife and cut his thumb!

The princes gasped at Eklavya’s act of bravery. But the tribal boy betrayed no signs of pain, and held out his severed thumb to Dronacharya.

“Here is my guru dakshina, Drona”, Ekalavya said. “I am happy that you have made me your disciple, even if I’m a mere Shudra hunter.”

The sage was humbled. He blessed the young archer for his courage. “Eklavya, even with out your thumb, you’ll be known as a great archer. I bless you that you will be remembered forever for your loyalty to your guru,” Drona declared and left the forests. He was moved and grieved at his own action. But he was content that his promise to Arjuna was not broken. The Gods blessed Eklavya from above.

But despite his handicap, Eklavya continued to practice archery. How could he do so? When one is dedicated, one can make even mountains bow. With practice, Eklavya could shoot arrows with his index and middle finger and he became a greater archer than he was ever before. His renown spread far and wide. When Drona came to know this, he blessed the boy silently and begged for divine forgiveness.

And true to Drona’s blessing, Eklavya is still praised as the most loyal and brave student in the epic of Mahabharatha.

Moral:
With your dedication and determination to learn something you can do anything you want..!!