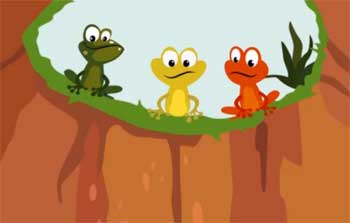 Once a group of frogs was traveling through woods and two of them fell into a deep pit.

All other frogs gathered around and when they saw that the pit was too deep. they told those two frogs that they were as good as dead because they couldn’t get their way out of that deep pit.

Initially both frogs ignored the comment of other frogs and tried to jump out of pit with all their strength.

All this time other frogs were telling them to stop even trying as it was of no use.


After trying for many times and still not able to succeed one of two frogs stopped trying and listening to all the negative response of frog from outside the pit he started to feel that it would be useless to try anymore as it would not be of any use. So, he decided to gave up and fell down and died.

But the other frog was still trying to jump out of that pit. It tried to jump as high as it can and every time he jumped other frogs would yell at him to stop trying and stop the pain and just die.

When he got out other frogs questioned him,”Did you not hear what we were saying?”

Frog who just got out of pit and explained to them that he was deaf and he thought that all other frogs were encouraging him to get out of pit.

Moral:
Be careful of what you say. Power of words goes long way. An encouraging word to someone who is down can Lift them up and Help them to make it thought day.
Destructive words to someone who is not feeling right can kill them. So always think before you speak.

Keywords: Stories on Power of Words – Inspirational Stories to Encourage Others/ Understanding Importance of Encouragement for Others