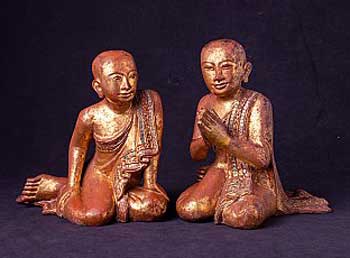 Once there was big monastery, where lived 500 monks. They were all practicing path of self remembering under their Master.

One day a man went to monastery to become disciple. Master accepted him as disciple but because he was simple, uneducated man from village, Master gave him job of rice cleaning in kitchen.

Monastery kitchen was big. Poor man used to wake up before sunrise and would go late into night doing his work of cleaning rice. He had no time left to attend sermons, prayers or read scripture or listen to wise talks.

All monks at monastery were great scholar and were known all over country.

Poor man continued just cleaning rice, doing nothing else. In all these years, he even forgot to count years, days, dates and even became suspicious of his own name because for twenty years nobody had said his name or called him by his name.

For whole twenty years, he was doing only one small thing – cleaning rice for monastery kitchen.

One day Master of monastery declared that his time to depart from the body has come. It was time for him to chose his successor.

He said, “Anybody who thinks that he had succeeded in self-remembering should write on wall of my hut, insight which shows he had seen the truth.”

Some scholars wrote but no one had signed, None of them had courage to sign his name out of fear that what if master wouldn’t like it

This went on for days, daily master would erase message saying, “Find out idiot who spoiled my wall.”

One day master erased message and said, “None of you has come to point of self-remembering. You all have been feeding your ego in name of self.

I reminded you again and again but having a big ego is joy. Now i will have to find person myself.”

In middle of night master went to man who had been cleaning rice for twenty years. For twenty years master had not seen him. Master woke him up.

Because in twenty years he had just seen him once for few seconds when he was initiated.

Man asked master, “Who are you? Why are you disturbing my sleep?”

Master said, “I am your master. Have you forgotten? What’s your name?”

Man replied, “This is difficult. Work you have given me is such that it needs no name, no fame, no austerities. It is so simple that i have forgotten everything.

I don’t remember my name. A few name comes to my mind but i can not decide which one is mine but i am grateful to you. ”

He touched his Master’s feet for blessings. Seeing his master after so long, he thought may be there was complain with his work or something is wrong.

He said, “Please don’t change my job. I have forgotten everything but i have also achieved everything. I know peace that i had never dreamed of. A silence that no words can express.

I have known such moments of ecstasy that even if i had died here right now, i wouldn’t have any complaint that life has not been fair to me. It has given me more than i was worthy of.

Please don’t change my job. I am doing it perfectly well. Has somebody complained about my work?”

Master smiled and said, “No, nobody has complained. But still your job has to be changed because am choosing you as my successor.”

Man hesitantly replied, “But i am only a rice cleaner. I don’t know anything about being Master or a disciple. Please forgive me but i can’t be your successor. I can not handle such big job.”

Slowly Slowly, there was no need for thinking, emotions, anger,fight, compassion, ambition.. Your ego died and with ego your name died.

You are not born with a name. It is the ego that is given a name – that is the beginning of the ego. With the death of the ego, you even forgot your own master because it was the ego that brought you to me.

You are absolutely right person to take my robe, hat and sword.. which i always carry with me and was given to me by my master.

But remember one thing – Take them and escape from this monastery as far as you can because if you stay here your life will be in danger. All these egoist will kill you.

You are so simple and you have become so innocent that if they ask you for the robe, the sword, the cap, you will give them. So, simply take them and go as far as you can into mountain.

Soon people will start arriving to you, just as bees start finding their way toward flowers when flower blossom. Because you have blossomed.

You need not to bother about disciples. You simply remain silently in faraway place. People will come to you.”

Man replied, “But.. But.. I have received no teaching and i don’t know what to teach them.”

Master said, “Just teach them to do small things, silently, peacefully, without any ambition, without any motivation to gain something in this world or in the other world, so that you can become innocent like a child.”