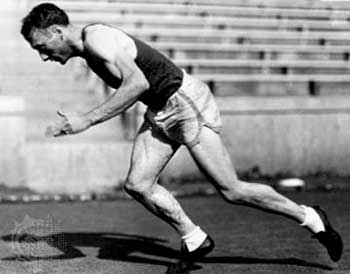 In a country side school, classroom used to be heated by old fashioned way. A little boy used to come early to school to start fire and warm class before after everyone else arrive.

But one morning when everyone else arrived they found the school engulfed in flames. They found unconscious boy inside and carried him out. Boy had major burns all over his lower body and was taken to hospital.

When boy was lying in bed in hospital, he heard doctor talking to his mother that little boy’s lower body was burned severely and he didn’t had much hope of his survival.

Brave boy didn’t want to die and somehow to the amazement to physician he did survive.


After some day boy again listened to doctor and his mother conversation. Mother was told that because of fire much of his lower body part flesh had been destroyed and his lower limbs had been crippled for life.

Brave boy didn’t lose hope and was determined to walk again but unfortunately waist down his thin legs just dangled there lifeless.

He was released from hospital and went back to home with his mother. Everyday his mother would massage his legs but for long time he felt no sensation in his legs yet he was determined that one day he would walk.

His mother used to wheel him out in to yard on his wheelchair to get some fresh air. One sunny day, instead of just sitting in wheelchair, he threw himself out of it into grass and pulled himself across grass dragging his legs behind.

Stake by stake, he began dragging himself along the fence, resolved that he would walk. He started to work his way to fence and then wore a smooth path all around his yard beside the fence.

Ultimately through daily massage and persistence and his resolute determination, he did developed his ability to stand up and then walk haltingly. Then he started t walk by himself and then run.

He began to walk to his school and then later in college has made in it’s track team.

Glenn Cunningham as a little boy who was not even expected to survive, who could never hope to run, on June 16, 1934 ran the mile in 4:06.8 minutes breaking world’s record.

Moral:
You can have Whatever your Heart desires, as long as you Desire it enough and allow your self to Guide you.

His efforts portrays that you want to create in your life is yours for making. The only one that put limits on our personal will is ourselves.

Develop and encourage your will to create and all the forces of nature within and without will help you bring your desire to pass.

Keywords: Stories of Persistence and Success – Inspiring Story of Glenn Cunningham, With Will Power and Determination Overcoming Disability Story