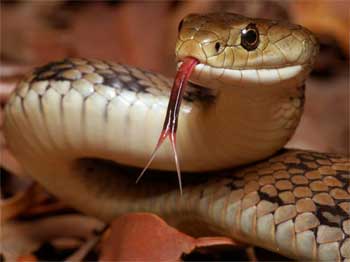 Once in village a man used to live alone at home. He loved animals and wanted to keep a pet for himself.

One day while walking by village cross road, he saw a little poisonous snake who was searching for food. Man liked it so much that he decided to keep it as his pet.

When he took it home, he would let it crawl in his house freely. For other’s safety he made a bamboo cage for it when he started to take care of it. Whenever he had to leave home, he would keep that snake in cage.

He named it Coco and was so fond of his pet that all his friends and relatives would call him as Coco’s father.


Man used to follow a monk. Before long, monk heard about it. He called man to him.

Monk asked him, “Is it true?? are you keeping a snake as your pet??”

Man replied, “Yes Master.. I love him like my own child..”

Monk was wise, he said to him, “It’s not safe to live with a poisonous snake. I would advice you to let him go for your own safety..”

Man was too fond of snake, so he replied, “Little Coco is like my own son.. I know it wouldn’t bite me and can’t give him up..!!”

Before man left, his master again warned him about danger of living with a poisonous snake.

Later one time, Monk and his followers went on to mountains for some work. Man went along with them and while out on mountain’s Man left snake in cage.

Monk and his followers returned after few days. After returning home, man realized that snake had not eaten whole time while he was out on mountains.

Man went toward cage and opened it to let him out for food. Because snake was hungry for long, as soon as man hand went toward him, snake bite him.

Moral:
One should not be Foolish to Ignore Nature. Some

times we need to Understand that Nature of Living Being’s can not be change and Act sensibly.