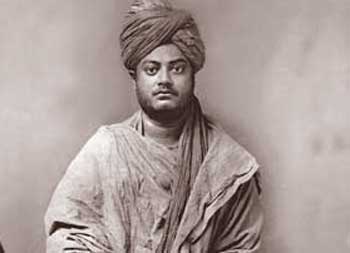 Once Swami Vivekananda was traveling by train, in same compartment a rich business man was sitting just next to Swami ji.

Rich man who was traveling with him was helping himself to varieties of eatables. He saw that Swami ji was carrying nothing and seemed tired.

(Being Sanyasi, Swami ji had control over senses. During his travel, Swami ji could travel by train only if somebody bought him his ticket. Otherwise, he had to travel on foot. He had to starve most of the time for he had no money.)

Rich man thought for a while and then spoke to him tauntingly, “You are an idler. You wear the saffron clothes only because you do not want to work. Who will ever feed you?


Why don’t you work and earn like me? With money you can buy anything to eat or drink.”

Swami ji asked him,”Why are you giving me all these??”

Sweet seller replied, “While i was sleeping i had a dream. In dream Lord Ram himself introduced to you and told me to give food to his starving devotee..”

Swami ji shed tears of joy, for the love God shows on his devotees. Rich man who was standing just behind Swami ji saw all this and was put to shame.

Keywords: God is Always There for You – Swami Vivekananda Story, Inspiring Stories of Faith and Trust, God Take Care of his Devotees Beautiful Story

6 thoughts on “God is Always There for You”