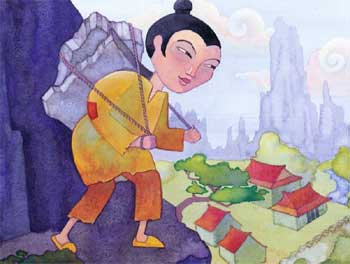 Once upon a time, lived a stonecutter, who would go to big mountain everyday and cut out slabs for houses. He was a very careful workman and had plenty of customers. For long he was happy and content.

In mountains dwelt a spirit which appeared to stonecutter and asked him if he want anything. At that time, stonecutter didn’t had anything to ask for. He left without wishing for anything.

One day, stonecutter carried stone slabs to a rich man house and saw there all sort of beautiful things. He thought to himself, “Oh if i were a rich man and could sleep in bed with silken curtain. How happy i would be..!”

Just then spirit answered him, “Your wish is heard. A rich man you shall be.”


At sound of voice stonecutter looked around but could see nobody. He thought it was all his fancy and picked up his tools and left.

When he reached his place, where he lived. He stood still with amazement and saw that his hut was changed to stately palace filled with splendid furniture. Servants were greeting him at door. He was overjoyed with it and soon got comfortable with new life.

One morning, stonecutter was peeping through closed blinds of his palace, to see what was going on in streets. He saw a carriage passed by, drawn by servants. In carriage sat a prince, with many servants around to serve him and care for him.

Seeing stonecutter thought, “Oh, if i were a prince.. and could go in such a carriage, have golden umbrella, how happy i would be..!”

And just then a voice answered, “Your wish is heard.”

Next moment, he was prince. Before his carriage rode one company of men. Servants waiting for his orders. He got everything that his heart could desire.

But yet it was not enough. He looked around, saw that in spite of water he poured on grass, rays of sun scorched it and in spite of umbrella over his head, each day his face grew browner and browner, he cried in anger, “Sun is mightier than I. Oh if i were only the Sun.”

That moment, mountain spirit answered, “You wish is heard.”

And stonecutter was now Sun and felt himself proud in his power but in short time, he began to grow tired of his might.

Discontent once more filled his soul and when a cloud covered his face and hid earth from him, He cried in anger, “Cloud hold captive my rays and is it mightier that I? Oh than i wish to be cloud.”

That moment he became cloud. After days and weeks of rain even after towns and villages were destroyed by power of rain, mountain remained unmoved.

He was amazed and cried, “Is rock mightier that me? Oh, if i were mountain.”

And that moment he turned into mountain and gloried in his power. Proudly he stood and heat of sun or force of rain could not move him.

He thought to himself, “This is better than all.”

But then one day he heard a strange noise at his feet. When he looked down to see what it could be, he saw stonecutter driving his tools into his surface. Even while he looked, a trembling feeling ran all through him and great block broke off and fell upon ground.

He cried in wrath, “Is a mere child of earth mightier than a rock, a mountain? Oh if i were only a man.”

Mountain spirit answered, “Your wish is heard. Man once more you shall be.”

And man he was. In sweat his of his brow, he toiled again at his trade of stone cutting. His bed was hard and food scanty yet he was happy. He learned to be satisfied with it and didn’t long anything anymore.

He was happy and didn’t have anymore desire to be greater or mightier than other.