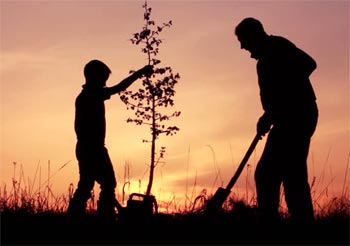 Once in a village lived father and son. Every night before going to bed father used to tell interesting stories to his son.

One day father told him, “Son.. God is omnipresent. He can see everything everywhere. Nothing is hidden from him.”

Son asked, “Father.. you say God is present everywhere but i am not able to see him anywhere..”
Father replied, “Son.. We can’t see God but he is everywhere and can see everyone and everything they do..”

Months passed by and a severe famine happened in village. Due to which Father’s fields were rendered barren and he had nothing to sell in market. So he decided to go to his neighbors farm and steal.


When father went out for stealing he set along with his son and entered his neighbor’s field. He instructed his Son to sit on a branch of tree to keep watch and signal if he sees someone coming towards farm.

Now as soon as father sat there to gather crop his son called him and said, “Hold on father..!!”

Father questioned, “But why?? Do you see someone coming here??”
Son replied, “Yes, someone is watching us..”

Father got up from there and looked around but he found no one there. Then he asked his son, “Who is watching us?? I see no one..”

Son replied, “Father you told me that God is present everywhere. He watches everyone and their deeds very closely. Then how will he not see you stealing from your neighbor’s farm?”

Hearing this father felt ashamed and dropped his idea of stealing and went back home with a lesson he learned from his innocent son.

Moral:
Firstly, We should not Do anything Wrong to Others as God is watching us and our Deeds.

Secondly, When Parents teach something to Kids they should also Follow that in their life.

Thirdly, We come across situations where we are tempted to support wrong acts. However, like Son we should build the faith that God is always there for us and avoid falling for such temptations.

3 thoughts on “Father Son in Fields – Stealing is Wrong”