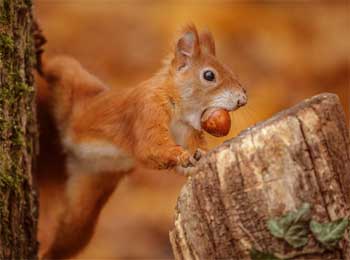 Once in a forest lives a squirrel who was very hardworking and honest. He used to work for his master day and night. From his work he would get more than enough to live by but still he used to work more.

Squirrel was promised by his master that if he works with same dedication then one he would give him ten big sacks full of walnuts to him as rewards. Knowing this squirrel was happy to do more and more work.

Sometimes Squirrel used to work a lot and get tried and think of relaxing and resting a little but as soon as thought of relaxing came to his mind, he would remember about reward and think of eating all those nuts which he would get later.

At that instant, he would stop thinking about rest and get back to work.


Sometimes, he would see his friends playing around and would wish that if he could have some time and play with them but then again he would remember about reward and get back to work.

This way years went by and a day came when his master called for him.

Because Squirrel was hardworking and honest, his master praised him for his work and gave him ten sacks of nuts as reward.

Squirrel was retired from his work and was very happy to get rewards for all the hard work he had done for all these years.

Now, finally squirrel was with sack full of nuts and started to think what he should do with all those nuts.

Just then Squirrel realized that while working entire life, his teeth got worn out. How will he eat all those nuts?

This story had become reality of today….

Man sacrifices his wishes and spend all his life on job, business and earning money and at last when he retires at age of 60, he has lost his ability to enjoy the money he had earned.

You May Also Like: Danger of Addiction – Deer Story