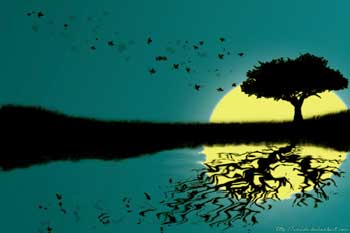 Once in a kingdom, king brought a beautiful diamond necklace for his daughter as gift but the necklace was stolen and everyone in the kingdom tried to find it out but couldn’t find it. At last king announced that who ever find necklace will be rewarded $50,000.

Everyone in kingdom knew about reward. One day a man was walking to home along a river. The river was too polluted and smelly. As man was passing by he saw a shimmering sparkle in the river. When he looked in to river he saw a diamond necklace. Seeing it reminded him about the reward announced by king. So, he decided to try and catch that necklace to get that reward.

As he was going to pass he again saw the necklace and stopped. This time he was determined to get it by any means. To get necklace he decided to get into river. Even though it was very disgusting thing to do to get into that polluted dirty river still he went in. He searched everywhere for the necklace but still failed. Feeling more depressed he came out of river.


As he came out a saint who was passing by river saw him and asked him what’s matter. Man knew that necklace could get him reward of 50,000$ so he refused to tell saint about what’s the problem is. Still saint asked him again about his problem as he saint can see that he was very disturbed and depressed.

Man thought about it for moment gathered his courage and decided to put some faith in saint and tell him problem. He asked saint to promise him that he will not tell anyone else about it. Saint promised., He told said about the necklace and how he tried to get it but still failed.

Saint told him that perhaps he should try to look upward, towards branches of tree, instead of that river. Man looked up and was surprised to see that necklace was dangling on the branch of tree. For the whole time he had been trying to catch a mere reflection of real necklace.

Moral:
Material Happiness is just like that polluted river, because it a mere reflection of True happiness that lies in Spiritual world.