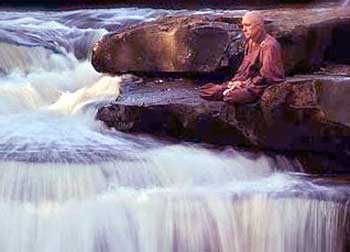 Once a Master living in solitude was meditating by river side. One Young man came to know about that and thought of going to meet him.

So, One day young man came to him and said, “Master, i wish to become your disciple because I want to find GOD.”

Suddenly master jumped up and grabbed the young man by his neck and dragged him into the river and plunged his head under water.


After master hold young man there for a minute, young man tried to kick and struggle to free himself.

Finally master pulled him up out of river. Young man coughed up water and gasped to get his breath. Eventually, young man quieted down and was able to breath properly.

After this master asked him, “Tell me, What did you wanted most of all when you were under water?”

Master replied, “Very well.. Now God home and come back to me When you want GOD as much as you wanted Air..” 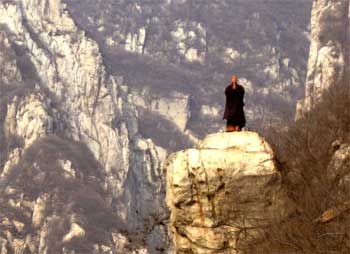 Once a monk who was specialized in Buddhist precepts was walking at night. It was dark all around and by mistake he stepped on something.

Thing which got under monk’s feet made a squishing sound and this made him think that he must have stepped on Egg bearing frog and because of dark he couldn’t see so even with that doubtful thought he went on to his place.

Because being a monk and follower of Buddhist precept against taking life. Finally even with the uncertainty in his mind about that thing, he went to sleep and that night in his dream he saw that hundred of frogs came demanding his life.

Monk got terribly disturbed and was not able to sleep and then when morning came he went to same place and looked over that thing which was crushed by his foot.

He found that it was just an overripe eggplant.

At that moment his uncertainty stopped and for the first time he realized the meaning of saying “There is No Objective World..”

And from that day he knew true meaning of life and know how to practice zen.

Moral:
When we attain complete Enlightenment we Understand True meaning of Teaching we have been Studying all along and find true Peace.

You May Also Like: Archbishop and Saints Story..! (True Enlightenment)