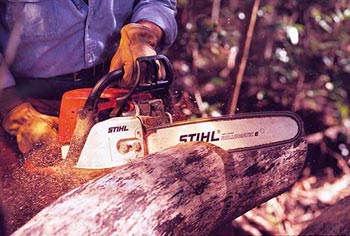 This year there were only two people in the final. One was old and experienced lumberjack while another was younger and stronger lumberjack.

Young man was full of enthusiasm and as the final competition started he went off into the woods and set to work straight away. Older lumberjack went to opposite side of the woods and started his work calmly.


Younger man took from this that the older lumberjack was taking rest after regular interval to get his stamina back. Younger man took it as an opportunity and took even that time to cut more trees without taking any rest.

At the end of competition, younger lumberjack looked at the pile of woods he cut and felt confident that he would win as he didn’t take rest like older lumberjack and continued to cut trees from beginning of competition till end without any rest.

At the medal ceremony younger man stood there confidently that he would be awarded the prize of being champion of competition Next to him was older man who was looking much less exhausted than the younger man.

When result were announced, young man was shocked to hear that older man won that competition.

Younger man turned to older lumberjack and said, “How can this be even possible?? After every hour you would stop cutting trees and take rest while i was still cutting trees even at that time and yet you win..”

Older man turned to him and replied, “Yes, i took break after every hour but it was not just for rest but i also took that time to sharpen my Tools..”

Moral:
In our Life we just keep on rushing to do things but forget to understand that we need to stop and let our-self rest and have time to think better and clear about life.