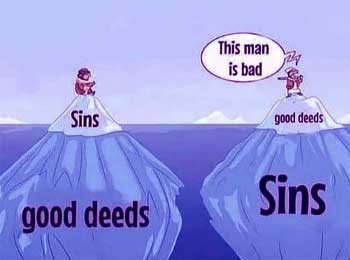 Once in a kingdom, it was habit of a King to disguise and make visits, to keep check on needs of his people. One day while he was out with his minister, he reached edge of city where he saw a man lying.

King saw that many people passed by but no one came to help that man. So, King himself went to that lying man and tried to wake him, then he realized that man was dead.

Seeing this, King called out to people and asked for help but still no one came near him. People couldn’t recognized King.

At last King stopped one of man passing by and asked, “I asked people to help but still no one came, why doesn’t anyone want come near this man?”


At this that person replied, “He does bad deeds and is sinful. Everyone around here knows that, therefore no one wants to go near him.”

Seeing people response, King and his ministers picked up dead body of that man and brought it to his home.

His wife started crying after seeing dead body of her husband. Just then King told her about people attitude toward that man.

At this, that man’s wife said crying profusely, “I can testify that my husband was a very good person..”

On this King was very surprised and said, “But people weren’t even ready to touch his dead body, saying that he was a sinful man.”

Man’s wife said, “I expect this from people because they always saw him going to bad places.

Truth is, my husband used to go to liquor shop everyday and bring it home and then put it all in drains, saying that i hope it may lighten burden of sin of some other human being.

At night, he would go to prostitute and give her full price of a night and ask her to shut door. This way no one would come to her of at least that night. Then he would come home and thank God that today he was able to lighten crime of that woman and some young man.

People used to see him going to those places.

I used to say to my husband – Remember the day you die, people will not even come to bathe you, nor will they come to shoulder your coffin. No one would attend your last rites.

At this he would laugh and say – Don’t worry. You will see that King and noble man will give shoulder to my coffin and attend my last rites.”

Hearing this, King cried and told his man’s wife, “I am King. Tomorrow, we will bathe him and give him shoulder for his last journey and get his cremation done..”

Learning:
We make Important Decisions by seeing or hearing things from other. We are just wasting our time by judging others. Instead our precious time should be spent in doing charity work or helping others.

We should not bother about what people may think and keep on doing good deeds because even if no one knows God knows..

One thought on “Sinful Man Deeds – Story about Judging Others”