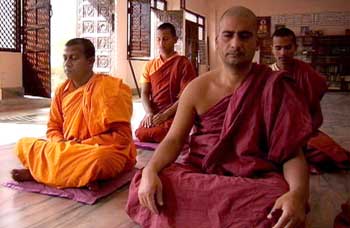 
In old times it was customary for Monks who is traveling and seeking for lodge to stay was to engage himself in dharma combat with head monk at Zen monastery. If he won battle then he could stay else he would have to seek quarters elsewhere.

They both were sent for combat. Soon the wayfarer returned to master saying, “Your man is too good. I must journey on.”

After saying this wayfarer left. When the traveler left. master’s attendant arrived. He was angry and out of breath. he demanded to his master, “Where is that rascal??”

He continued, “Master, first he insulted me by holding up one finger to indicate i had only one eye. Still being polite i held up two fingers to indicate that he was blessed with two eyes but still that traveler kept going on and help up three fingers to indicate that together there were only three eyes among them. So i wanted to hit him hard and made a fist but he ran off.. Where is he hiding??”


Four monks decided to meditate silently without speaking for few days. By night fall on the first day candle began to flicker and then blown out.

Second monk responded, “Aren’t we supposed not to talk?”

Listening to this third monk questioned them, “Why did you two broke silence?”

Fourth monk laughed at them saying, “Ha ha! I am only one who didn’t speak..!!”

Moral:
Never be too quick to judge others.