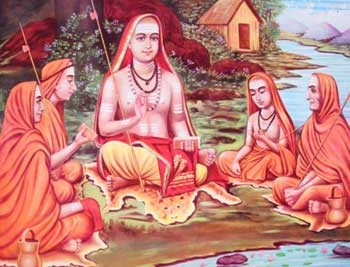 Once a Master was sitting with his four Disciples and was them teaching a lesson.

After he completed that lesson he said to his disciples, “All four of you should learn this lesson yourself and remember that no one should speak until come back. I will come back after an hour and then we will discuss about this lesson.”

After saying this master left. All disciples sitting there started to read and learn that lesson.

After a while sky got cloudy and it looked like it will start to rain.


Seeing this one of the disciple said, “It seems like it is going to rain today.”

Listening to him second disciple responded and said, “You shouldn’t have said anything as master has asked us to stay silent till he come back and now you have disobeyed him.”

Third disciple said to second one, “See, now even you are speaking..!”

Those three disciples spoke in master’s absence but fourth disciple still didn’t said anything and silently kept studying that lesson.

After an hour master came back.

As soon as disciples saw master, pointing toward second disciple first one complained, “Master, he spoke in you absence.”

Second one said, “So what?? even you didn’t kept quiet..”

Third said, “Master, they both disobeyed you..”

Just then first one said, “Who are you to say so? Even you spoke in master absence at that time..”

Seeing this master said, “It means all three of you spoke in my absence. Only one who obey me was fourth disciple and he was the only one to follow my instructions properly. Surely he will become a better person in future..

But i am not sure about three for you. You all disobeyed me just to complain about other one and just because of this you didn’t realized you own mistake..”

After listening to master those three disciples felt very shameful about their act and accepted their mistake. They asked for forgiveness and promised to never repeat that mistake.

Moral:
This happen with most of us, We focus so much on point out other people mistake that we don’t realized that we ourselves are doing same mistake.
For peaceful mind and happy self, instead of pointing out others mistake we should look for our own mistake and correct that mistake.