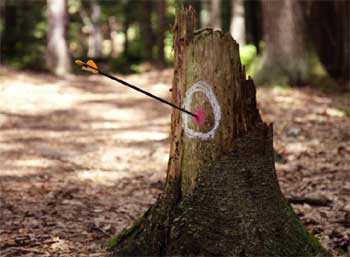 Once there was a King who was very proud of his archery skills. One day he went out and while he was passing through his kingdom.

There on reaching a village he saw some trees with painted with archery target and all arrow were struck exactly at the bull’s eye of each target on trees.

King was surprised to see that and stopped his chariot. He asked his soldier to go and inquire about one who have displayed such wonderful archery skills.

Soon soldier came back with people from around the village. They told that it was done by a boy from their village. Soon boy was bought in front of King.

When boy heard about displaying his skills he hesitated and then told king that he had no skill or formal training in archery. He used to strike arrows at trees carelessly and later paint concentric circles around the point where each arrow struck the trunk.

He told King that he liked archery and he thought that with this he could easily deceive anyone and convince them about his archery skills.

Similarly In life we meet many people are like that who look Good and Beautiful on outside, only to deceive other but are full of Hypocrisy and Sins.

We see or meet many people who Pretend Expertise in Holiness and impress people by Deceptive Appearances but they just want to Deceive People.

Individuals pretending to be saints or prophets may proclaim publicly about their achievements or attributes but only genuine quality will get lasting recognition.