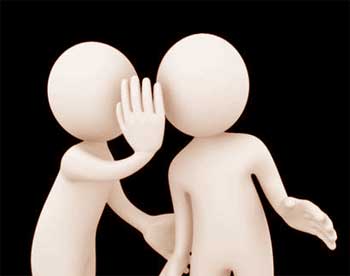 Once in a village there was an old man who was didn’t like his young neighbor. So he spread rumors saying, “My neighbor is a thief..”

One day a theft happened in same neighborhood and because of rumor everyone doubted that young man. As a result he was arrested.

Some days later after investigation young man was found innocent and was released from the custody of police. Young man felt humiliated as he walked back to his home.

Young man decided to sue that old man and filed case in court for wrongly accusing him.


On the date of hearing, in court when judge asked old man about accusing young man and spreading rumor about him.

Old man replied, “They were just comments.. It didn’t harm anyone..”

Before passing judgment for the case, judge said to old man, “Today before leaving, wrote all the things that you said about that young man on a sheet of paper and cut that up into small pieces.

Take those piece with you and on your way to home throw those pieces of paper out. Tomorrow come for the hearing for sentence..”

Old man left and did as judge asked him to do.

Next day judge told old man, “Before receiving sentence.. I want you to do one more thing..”

Judge replied, “You will have to go out and gather all the pieces of paper that you threw out yesterday..”

Old man was shocked and said, “I can’t do that.. Wind must have spread them and i won’t be able to find them anymore..”

The judge replied, “Same way.. When you comment something negative about someone that may destroy the honor of that man to such extent that one is not able to fix it..”

Old man realized his mistake and asked for forgiveness of that young man.

Moral:
Don’t blame anyone without knowing fact or truth.. Your words May Ruin Someone’s Reputation without any fault of theirs.. Or even ruin their Life..

Keywords: Short Stories on Rumors – Rumor is a Great Traveler Best Moral Stories with Lesson about Harm of Spreading Rumors