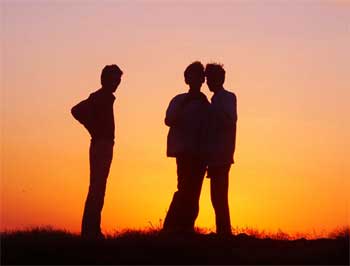 Once in a village lived three friends who were not able to earn much money so one day they decided to go to city together to earn money.

On decided day all three friends came prepared for the journey to city. After walking for two days on their way to city while walking through a forest they found a bag full of gold coins.

They were very happy to get that bag and decided to divide those coins among three of them after returning home. Friends were tired and hungry because of traveling for a long time. They decided to eat food.

Because journey was long they had no food left with them. So one of those friends went to nearest village to buy food for them and other two stayed back with bag of gold.


Friends who went to buy food, on his way he thought to himself that if he kills other two then he can have all the gold coins for himself. So After buying food, he bought some poison and added it to food before returning to them.

On other side other two got greedy and talked that if they kill third friend then they can divide all the coins between just two of them. Both of them decided to kill him. When third friend came back with food, other two grabbed him and immediately murdered him.

Both were happy that now coins will be divided between just two and sat to eat food bought by third friend. Just after few minutes of eating that food both of them died on the spot.

That bag of coins was left there. Three friends who got greedy and conspired against each other were dead because of their greed.

Moral:
One should not get Greedy and do Sinful act because that will Lead to One’s Failure and Destruction.

More Karma Stories : Why Do we Suffer? (Fruit of Unknown Karma..!!)