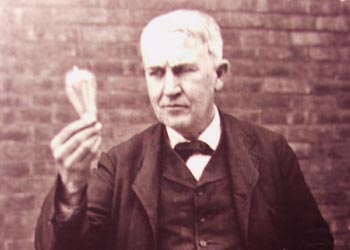 
When Thomas Alva Edison successfully invented light bulb all this assistants were happy. As he had experimented around 1000 times before getting success in his attempt to invent light bulb.

Edison called office boy and asked him to test that bulb. Being just a office boy, he was very nervous to even holding that bulb in his hand still he did because Edison asked him to test it. He was so nervous holding it that due to nervousness he accidentally dropped it.

Office boy got scared that he would get fired from his job for dropping such important invention.


After 2 days Edison again asked that office boy to come to his cabin. All assistants were present there. Edison constructed another bulb and asked that boy to test bulb.

All assistants were surprised and said, “Why did you called him again?? There are chances of him dropping it again and all your effort could go to waste..”

Edison replied, “It took me roughly one day to construct that bulb again and even if he drops it again, i can again construct bulb with in a day..

But if i don’t give him same task again then he would have lost his self belief and confidence which would be very difficult to get back.. And i Don’t want that to Happen..”

Moral:
If Once Mistaken in some task, Not doing it again may lead to Losing Confidence to Try doing that work again.

On the demonstration of electric bulb an reporter asked him, “How do you feel to fail 1000 time??”

Edison replied, “I didn’t failed 1000 times. Invention of light bulb was done in 1000 steps.. I didn’t get discouraged at every wrong attempt as it another step forward..

Every man develops idea and works up to point where it seems impossible and then get discouraged. There is no place to be discouraged..”