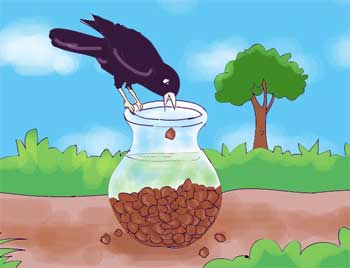 After a little while, he saw a jug of water below. Crow blew straight down to jug. Crow saw that there was some water inside jug but crow was not able to reach it using its beak.


Crow sitting on jug thought for a while.

Then it looked around and saw some pebbles lying near by. Seeing the, suddenly crow got an idea.

It started picking up those pebbles one by one and dropped each of them in jug. As more and more pebbles filled in jug, water level kept rising.

Crow plan worked. Soon, water it was high enough for crow to drink.

Moral:
If you Try Hard Enough, you May Soon Find an Answer to your Problems. 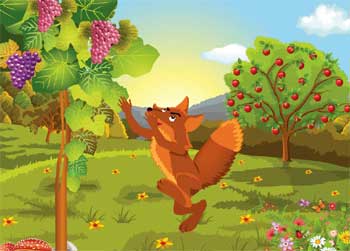 Once a fox was walking around fields. Soon it came to a vineyard and as it came nearer and nearer, he could see some bunch of juicy grapes.

Fox looked carefully around him, to make sure that he was safe from hunters.

After fox was sure that no one was around, he decided to steal some grapes before anyone came along.

Grapes were just too high for him..!

Still fox was not ready to give up. He backed off, took some running and leapt into air toward grapes but failed again.

It was getting dark and fox was getting angry. His legs were all hurt with all running and jumping. At last he stopped trying.

As he walked away, he said to himself, “I don’t really want those grapes. I am sure they are too sour to eat.”

Moral:
When we cannot Get What we Want, we Pretend that it is not Worth having.