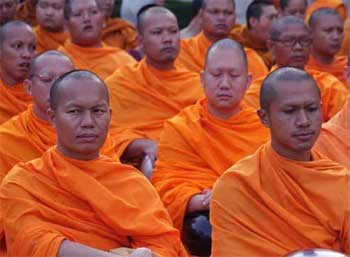 Long ago in China lived a very successful businessman whose business was to sell combs. Businessman got old and was about to retire.

He had three sons and before retiring he wanted to place his business into wise and able hands. So, he called his sons and gave them a assignment. He instructed them to sell combs in the Buddhist monastery. He told them they have three day for the assignment and report back to him.

His sons were shocked and confused because monks who lived in monastery were bald and never grew any hair yet all three sons went for the job assigned to them.

After three days, first son reported to his father that he was able to sell only two combs.


Father asked him, “How were you able to convince them to buy those combs??”
First son replied, “I told them that they can use those combs for scratching their backs in case of inching..”

After some hours second son came and reported that he was able to sell 10 combs.

Father asked him same question, “What did you said them??”
Second son replied, “I advised them if they buy combs and keep them in monastery that would help their visitors and pilgrims to comb their hairs, as their hairs might be ruffled during journey..”

Just few minutes later, third son came and reported that he was able to sale thousand combs. Everyone was surprised to know about this surprising figure of thousand combs.

Father was very happy with his result and was curious. He asked him, “Son, you did a wonderful job. How you were able to sell thousand combs??”

Third son replied, “I went to monk and gave them a idea.