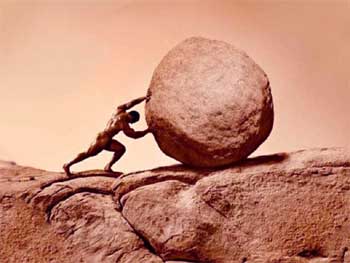 Once in a far away place lived a man who had faith in God. One night, a man was sleeping soundly. Suddenly a huge sound woke him up. When he opened his eyes, he saw that his room was filled with light.

Just then God appeared before him, showed him a large rock outside his house and told him to push that rock with all his might.

Next morning when man woke up, he remembered what he saw that night. He got outside and pushed it with all his might but wasn’t able to move it. Despite it man didn’t give up and from that day he made his routine to push that rock daily with all his might.

For many years he toiled from sun up to sun down, his shoulders set squarely against the cold, massive surface of that large rock, pushing with all of his might.


Each night the man returned to his cabin sore and worn out, feeling that his whole day had been spent in vain as that rock never moved a bit even after many years.

Not seeing any progress, man started to get discourage and just then devil showed up in his dream and said, “You have been pushing that rock for long time but it hasn’t moved.. Why to go through all that pain? It’s impossible to move that rock that’s why It’s better to leave it at this and live easy life..”

Man was disheartened but still he decided to pray to God and tell him about his troubled thoughts.

He prayed, “I have labored  long and hard in your service, putting up all my strength for what you have asked me to do and yet after all this time.

I have not even budged that rock by millimeter.. What am i doing wrong?? Why am i failing?”

Just than God appeared and said, “My child, i asked you to serve me and you accepted it. I told you to push that rock but i never said that i expected you to move it..!!

Your task was to push and After all these your you think you have failed but is it really so??

Look at yourself, Your arms are strong and muscled, your back sinewy and brown, your hands are callused from constant pressure, your legs have become massive and hard.

Facing opposition you have grown and your abilities now surpass that you used to have.

You haven’t moved the rock But your calling was to be Obedient and to push and to Exercise your Faith and Trust in My wisdom. This you have done.”

Moral:
At times when we Face difficulties in Life, we should just Trust in God and Push. By all means, exercise the faith that moves mountains but know that it is still God who moves mountains.

One thought on “Trust God – Facing Difficulties in Life..!”