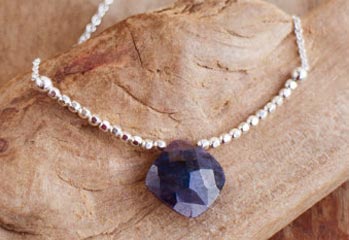 After the death of a jeweler, his family got into financial trouble. They didn’t had much money left for even buying food.

So one day, Jeweler’s wife took one of the sapphire necklace out of safe and said to her son, “Son, take this necklace to your uncle’s shop and ask him to give you money in exchange of this necklace.”

Boy went to his uncle with that necklace and gave that to him.

Uncle took that necklace and looked at it carefully and said, “Son, go to your mother and tell that right now market is not good. She can sell it later when you can get better price for this necklace.”


Then his uncle gave him some money and asked him to come next day and learn to work with him and this way he can also earn money to support family need.

From next day boy started to come to his uncle’s shop and learn work of examining jewels and precious stones.

After sometime he got really good at examining jewels and soon people from even far areas started to come him to get their jewels checked and know their value.

One day, his uncle said him, “Son, go to your mother and tell her that now market is good and she can sell that necklace for good value.”

Boy went home and asked his mother for that sapphire necklace. When he examined that necklace he found that it was fake.

Next day he went to his uncle’s shop he didn’t took that necklace with him. When he reached shop his uncle asked about that necklace.

Boy said, “I didn’t bring that necklace as when i checked it, i found that it was fake and it has no value.”

Then boy questioned, “Uncle when you knew that it was fake why did you said to keep it back and bring when market is good?”

Uncle replied, “When first time you brought that necklace to me, at that time you were broke and you needed money. If i had told you at that time that it’s fake then you would have thought that i am lying.

And knowing your financial condition is not good i am trying to cheat you by saying an original necklace as fake But now when you have knowledge about jewels, you know that it’s fake.”

Moral:
Without knowledge we tend to Misunderstood and ruin Relationship therefore we should Think wisely.

One thought on “Price of Necklace..! Knowledge Story”