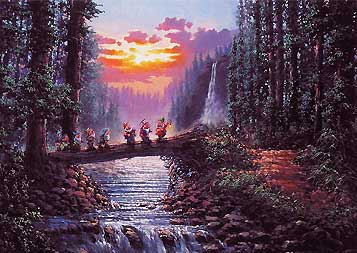 Dwarfs asked them not to bother others while playing as…

First dwarf had headache and wanted to have some peace. So he requested princes not to shout while playing.

Second dwarf was painting and asked princes to move away from the path of its sight as they were blocking its light and creating trouble for him and because of this he was not able to paint properly.


Third dwarf was doing a giant puzzle and asked them to be more careful around puzzle while playing and not to tread it beneath their foot.

Fourth dwarf was peacefully watching butter fly and requested princes not to frighten it away.

In evening both princes got separated while returning back to palace and lost their way. In their way each prince came across those dwarfs and asked them for their help to return to palace quickly.

Dwarfs were angry with prince who disrespected them and bother them whole time so they refused to help him and on the other hand prince who didn’t bother them was helped by dwarfs and reached palace safely through secret path with help of dwarfs.

Prince was back to palace in no time while other prince who disrespected them had to go through lot of trouble to find way back to palace all by himself and was late due to which he got punished.

Prince now understood the value of respecting other and their need.

Moral:
We should Respect other people’s Problems  and should not Trouble them.

You May Also Like This – Son Expectation.. (Father Graduation Gift)